Disability as the Great Unknown

The level of ignorance associated with disability in general and disability rights shocks me. I was shocked 35 years ago. I remain shocked today, 23 years after the ADA supposedly made me equal to other American citizens. This thought came to me early this morning when I was thinking about food. Going back and forth to Syracuse has forced me to be creative in terms of food. Regardless, I read with great amusement an article in the Houston Culture Map. Apparently there is a critically acclaimed restaurant in Houston--Oxheart. Like other restaurants known nationally, it is very hard to get a reservation at Oxheart. The restaurant has suddenly generated headlines for the wrong reasons. Apparently Oxheart is not wheelchair accessible. This fact was not made clear to one visitor who could not enter the restaurant and was allegedly forced to pay a $200 plus cancellation fee. Based on what I have read, I am not at all clear if the restaurant is or is not accessible. I do know the bathroom is not accessible--hardly a shock to others that use a wheelchair.

I am not particularly interested in Oxheart. I am interested in the way the lack of access has been framed in newspapers and the Houston media. In "Top Houston Restaurant Embroiled in Wheelchair Access Controversy: Chef Disputes Houston Mag's Account" Eric Sandler is taken aback the restaurant has failed to comply with the ADA. The lack of wheelchair access was first raised by Houstonia Magazine feature editor Katherine Shilcutt. As near as I can determine Shilcutt wanted to dine with five other people, one person was a "wheelchair bound professor"(it was not me). Upon arrival, the "wheelchair bound" man was told he could not be accommodated. Worse, the restaurant did not care nor did they apologize to the party of five. The restaurant also initially refused to waive the hefty cancellation charge. Shilcutt was furious and followed up on being refused service. I had to laugh at the privilege Shilcutt enjoys and her utter lack of knowledge regarding wheelchair access in restaurants when I read the following:


You might wonder how a restaurant—or any other public facility, for that matter—could get away with not having handicapped access, especially in this day and age. Yu claimed that because Oxheart was housed in a historic building, it was exempt from such regulations, having been “grandfathered in,” as he put it. That’s a load of offal, said Aaron McCullough, an attorney and former social worker who specializes in lawsuits and other issues involving the 1990 Americans with Disabilities Act. “The ADA doesn’t opt out anything from compliance. There ain’t no such thing as a ‘grandfather clause.’” It’s a common misconception, however, and McCullough still encounters the odd eatery that isn’t ADA compliant.- See more at: http://www.houstoniamag.com/eat-and-drink/articles/standing-room-only-october-2013#sthash.pU3iZVwq.dpuf

Shilcutt did get to the heart of the issue when she followed up with the chef/owner who stated:

retrofitting his tiny restaurant according to ADA standards would be cost-prohibitive. Besides, he said, incidents like the ones my friends and I experienced are rare. “Generally what we do is let them know what kind of accommodations we do have.” Those accommodations include a portable ramp (which wasn’t available on our Sunday evening visit, although both parties agree that the professor mentioned his handicapped status when his reservation was made.) A handicap-accessible restroom is not one of the accommodations. Yu had no suggestion as to what wheelchair-bound customers should do if they needed to use the facilities during one of Oxheart’s marathon tasting menu dinners.

The owner/chef Justin Vu is ever so sorry. It was a "breakdown in communication". And how is it just because the "problem" arises rarely it is somehow okay? I must confess I found it sadly humorous that restaurant reviewers are so oblivious to wheelchair access. After 35 years of paralysis I have learned a few things. For instance, I do not gracefully accept an apology. I want to know one thing when the ADA is violated: how and exactly when will the so called problem be solved. I refuse to be bribed as well. No free hotel room or meals for this cripple. I do not complain for myself. Instead I want access for the next person that comes along.  I have also learned I am screwed when a person starts to tell me all about how communication breakdowns are the the reason why a hotel room is not accessible or why a rental car with hand controls cannot be found. In the restaurant business, I have long observed the existence of the cripple table. This is invariably the worst table in the dining room. Out of sight, near a heating or air conditioning duct or in some way the least desirable place to eat. Space is also an issue: I wish I had a dime for every time a  server bumped into my wheelchair. As for a bathroom, aside from big box chain restaurants this is a pipe dream. Even if a bathroom exists getting to it is an adventure--an adventure that involves many sorry's and having a multitude of diners awkwardly move or get out of their seats not once but twice.

The reason restaurants are routinely inaccessible is money. Every inch of a restaurant is designed with money in mind. More tables equal more revenue. The larger the dining room the more revenue it will produce. Hence small kitchens and small bathrooms are the norm. The result is I routinely dehydrate my body if I am going to go out to eat. I choose not to drink beer with my meals. Unlike those that are bipedal when a person with a disability goes out to eat lots of mental gymnastic takes place. Hence this image comes to mind is when I think about eating out: 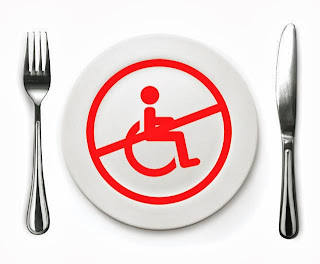 I guess one reason this doesn't come up often is the fact that 28% (as of 2010) of people with disabilities live below the poverty line.

I live in a tourist town and nothing is accessible. Interestingly (and sadly) we once had a summer school of the National Theater Workshop for the Handicapped here. At that time, a good proportion of the students could not go to any restaurants, galleries, or stores, save McDonald's. And nothing changed. The landlords don't want to pay for access. They don't care if students or poor people can't get into their businesses.

If a rich/famous person who's using a wheelchair shows up a gallery opening or an expensive restaurant, they'll do everything to make sure they are accommodated, and they'll bend over backwards. But these people are always the privileged. Rather reminds of your recent posts.

I have heard the "grandfather" excuse frequently. Thanks for informing us that it is a crock of BS.

Julie, I hear the "grand fathered" in excuse all the time. Another lame excuse is the the building is a landmark building and exempt. Columbia University used this dodge for years as did other Ivy League schools.
The real issue is and always has been money.

I am completely unsurprised by the lack of access. In my experience, lack of wheelchair access is just the tip of the iceberg. There are other issues as well. For instance, I have only been to a restaurant a handful of times in the past several years because they are always too loud. Much of the time, loud music is playing; for people with hearing issues, competing sound is very difficult. I have a disability that makes filtering sound nearly impossible. This means that with music playing, I can't hear my husband speak. He has tinnitus and hearing loss. This means that with music playing, he can't hear me speak. Plus, with the ways in which tables are jammed together, it is generally impossible to find a quiet space even in a restaurant that doesn't play music. There are stores that have similar access problems. I simply can't go in them because there is no way for my body to handle that level of sound. I have occasionally found places that will do a good job of accommodating these kinds of issues, but usually, the "accommodation" consists of turning down the music so imperceptibly that it makes no difference at all. For people who are hard of hearing or have issues with auditory processing, it's very difficult.

Rachel, You are correct the lack of wheelchair access is the tip of the iceberg. I often think of you as I bring up sensory issues. I am stunned by the negative reaction. The issue extend well past wheelchairs.

Sensory issues get so little respect, especially in a culture with such a thorough-going fear of silence. There was a store in Brattleboro where they would always turn off the music for me. It was awesome, but you could feel the tension in the place rise as the silence descended.

My husband has a theory that they play so much loud music in restaurants and stores now because then people won't have to really talk to each other or listen to each other; they can always be distracted. It's kind of a disaster for someone like me who is very focused -- both because it's in my nature and because I have to concentrate very hard to navigate through the sensory world. It's very difficult for me to talk to someone who is distracted. It's like being sober and trying to talk to someone who is drunk.

Went to TGI Fridays this summer with hubby. Music was very loud. The hostess said it is always this way. And when the waiter introduced himself, the first thing he said was "I'm _____ & I will be your server today. The restroom is to the right of the bar".
We never asked where was the bathroom.
Felt so old. As I looked at the other tables, everyone was in their 30s or younger playing with their cell phones.

The "cripple table" at Bobby Flay's at the Borgatta in AC is right next to the kitchen doorway. Lovely view of the waitstaff bringing out other people's food.

It was not long ago that I heard that the grandfather clause was a load of BS. Who started this crock, honestly? Hearing that changed my life in a way. I live in the northeast, where every other building can probably be called historical. I thought there was nothing I could do.

Now I know I can make a big stink about it, and I am.

I have often felt the way you do though. My husband works in the restaurant business. We love to go out to eat when we can afford it. It has very often been an adventure. If not for my able bodied husband willing to navigate me and /carry/ me when necessary, there are many places we'd never be able to go. It isn't right. It isn't dignified. The message we so often get, sadly, is that most people just don't really care about our dignity.

Yes, of course, the "cripple table!" In the old days, I could spot it easily, it was the first table we stumbled into or the one in the very, very, and I mean very, back. Now I'm often not so sure, what I do notice however is that a lot more servers and hosts are comfortable just letting me do my thing and move little tables around. But of course I can't go to 1 million restaurants.