Ritual Humiliation in the Hospital

Hospitals are total institutions. They operate much like a prison, nursing home, military base, or university. Every aspect of life is controlled. Erving Goffman did sociological field work in mental institutions. He was not impressed. No institutions are impressive. Institutions violate our deeply ingrained and highly valued sense of autonomy. When one's life is controlled by a total institution options may or may not exist. At issue is the measure of control. Do not buy into the jargon spewed by those that work at institutions--the core issue is always control. At a military base or prison the control is extreme and obvious. All wake up at the same time. All eat at the same time. All go to the bed at the same time. A hospital is not much different. Once admitted to a hospital, a patient has no control over their life and liberty. Choices exists but they are limited. One is given an ID bracelet--an identity marker at multiple levels symbolically and practically. Time slows down. Control of your time, when and where you will be seen is not possible. You are at the mercy of the vagaries of the system. Violate that system and you are branded a "difficult" or "noncompliant" patient. If you earn this designation you are going to get inferior care. Compliance is expected. You have a role in the institution. Your job is to get better and do as you are told. Do not violate this dictate. To do so not only earns you inferior care but puts your life at risk. Do not fool with the powers that be. You can easily be shipped out to a far less pleasant place. You can find yourself heavy medicated and in a drug induced stupor. Institutions calls this chemical sedation or chemical restraint. Yes, we no longer tie people to the bed or their wheelchair nor do we perform lobotomies on the mentally ill. We drug people into silent oblivion. Control and the never to be changed highly valued schedules rule.

These thoughts have been coursing through my mind because of a photograph a reader sent me. I was stunned. In a hospital symbols abound.  Obvious social markers at a teaching include the archetypical long white coat. Some symbolic markers are objectionable. For instance, I was at a hospital facility in Syracuse and noted physician ID tags had the large word "DOCTOR" in bold black ink added to their ID tag. One might as well put the word GOD on the ID. Negative symbolic markers  exist. Here is a perfect example 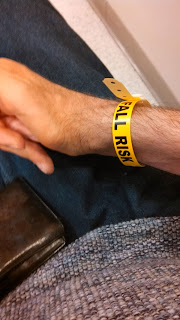 This tag was placed on a Bad Cripple reader at an emergency room. The man had a spinal cord injury. This tag has a single use--to further spoil the identity of the man in question.  Erving Goffman wrote about spoiled identity in his classic 1963 text Stigma. Goffman noted that there were three types of stigma: physical identity, group identity, character identity.  We people with a disability are saddled with all three forms of a spoiled identity.  What the "fall risk" bracelet does is separate this man from the possibility of normalcy. Goffman would have labeled the bracelet a dis-identifier. In the institutional setting of a hospital this man is physically and socially problematic. He is a physical risk to himself and as such requires more work--often hard physical labor. He might need to picked up if he fell. He might be injured if he fell. The worst part of this sort of dehumanization is that the man cannot complain. Normal people, the health care staff, are the power brokers. The patient is powerless. He or she must defer to the power and hopefully kindness of expert others. Other here refers to any "normal" person, staff or visitor. Staff expects this man to be compliant and not complain.  Can you imagine what would happen if this man objected and tried to explain the symbolism involved?

When a person with a disability enters a hospital he or she encounters a hostile environment, one that is likely grossly inaccessible. Ironic, eh. The infuriating thing is any effort to change the social structure of the institution is domed to fail. The second you cross the threshold and enter an institution you have relinquished control to others. When in a pissy mood I upset the expected balance in institutions. I have been given detailed informed consent forms seconds before a procedure and with a straight face I tell the uninformed health care worker that I will need at least 30 minutes to review the form. When I have been admitted to a hospital and when weary of the endless irrelevant questions that drone on I will insert inappropriate replies. For instance, when one gets to "hearing normal" I repeatedly say what. It usually takes at least six "whats" before the health care employee catches on. I am guilty of being subversive. Frankly, I thrive in an institutional setting. I am a master manipulator. I think most people that have gone through the medical mill learn how to be subversive. It is the only way to assert your humanity and lessen the control an institution has over your life. The fact is the more you are liked the better your care will be. I saw this as a sick child. I saw this as a sick adult.  This is a social skill that every person with a disability must hone as if their life depends upon it for I learned in 2010 one's life does indeed depend upon being perceived by health care workers as possessing a life worth living.
Posted by william Peace at 7:04 AM

This reminded me of similar points brought up in David Perry's article about compliance.
You may be interested: http://www.thismess.net/2013/10/cult-of-compliance-boy-with-toy-gun.html
If you didn't already see it.

Mardra, I have heard the term the cult of compliance. To me this is the corollary of the post 9/11 police state we live in. Security trumps all. Human rights and privacy are secondary to the perpetual state of a security war that can never be won or end. I find this deplorable. So your point is well taken. Compliance in an institution is now even more valued. Scary thought.