As many people know, at Nelson Mandela's memorial service in South Africa a fake interpreter was present. I leave it to others far more familiar with sign language and Deaf culture to detail what took place and why.  Suffice it to say I was dismayed--shocked really that such an obvious fraud could take place. In following this story I was equally shocked that the Today show would make a joke about the incident. I will admit I do not understand the appeal of morning television programs. I am a morning person and wake up in the go mode. The idea of sitting in front of a television in the morning is foreign to me butI know morning programs are big business.

Yesterday the the hosts of the Today Show were discussing the fraud that was perpetrated and a person popped up in the corner of the screen and began making mock sign language gestures. 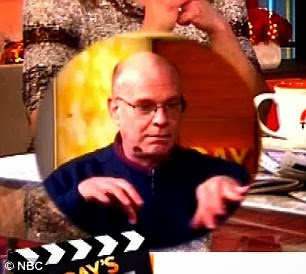 How could a bland morning show such as the Today Show geared to appeal to all Americans mock such a fraud. I will give the hosts credit. Within seconds they knew the so called joke was tasteless and wrong.

The Today Show tweeted an apology immediately. "We aired a joke in our 9:00 hour that was offensive. We apologize to our viewers." Apology accepted. Yet I cannot get past the fact someone at the Today Show thought this was funny, put thought into it, found a person to perform fake sign language, created a round bubble to input into the program. This takes a good bit of work. Someone employed by the Today Show thought this was funny. I cannot get past this. A fraud stood next to world leaders and the Today Show thinks this is funny?  To me this is an indication that the public at large thinks disability rights are nothing more than a joke.

I suggest readers go to Feminist Philosphers and read Teresa Blankmeyer Burke post "Defer to the Deaf Person: Interpreters and Quality Control". Link: http://feministphilosophers.wordpress.com/2013/12/11/defer-to-the-deaf-person-interpreters-and-quality-control/ The implications of a fraud such as the one in South Africa has a profound impact on deaf people. Quality control is a major problem in Deaf Culture. While I have seen this first hand myself Teresa has told me one horror story after another in her struggle to effectively participate in the academic field as a deaf scholar.  She refers to a term I have never heard--"Bad Fit to the Assignment". I translate this into a failure to communicate and lack of interest in having deaf people participate. Another variable is cost. Qualified interpreters are not cheap, especially interpreters who work with deaf philosophers and academics such as Blankmeyer Burke. This problem however is not financial but cultural. To provide effective interpreters requires academia to become allies with deaf scholars, acknowledge their expertise, and rely on the fact they know best how to be accommodated. Based on my limited experience this reasonable approach suggested by Blankmeyer Burke is not going to be instituted for a very long time.
Posted by william Peace at 5:21 AM

Well said, Bill. Your point about the time and effort put into the Today Show "joke" is quite telling. Thanks for your solidarity in this struggle -- with this post, and in so very many other ways (you know what I mean!)

Teresa, To have a middle America bland TV program make such a "joke" reels how deeply ingrained disability bias is in society.

I had a similar reaction to Stephen Colbert's "joke" signing, and his further "joke" about the deaf people who don't know sign language. Really stupid and offensive. Particularly when later-deafened adults or people forced into an oral education without sign do struggle to learn sign language later in life and do feel isolated.