Last week Diane Rehms had Ira Byock and Barbara Coombs Lee on her nationally broadcast NPR radio show. Byock is one of the nation's leading palliative care physicians and author of Best Care Possible. Coombs Lee is president of the advocacy group Compassion and Choices, the well funded and influential lobbyist group that advocates for assisted suicide. As is the norm, the Diane Rehms show was heavily biased in favor of assisted suicide. Coombs Lee spoke at length and Byock was given very little time to respond. Again, this is the norm. Byock is accustom to this having appeared on PBS News Hour, 60 Minutes, and the aforementioned NPR radio program. I have met Byock twice. He is a kind articulate man and like many others is opposed to assisted suicide legislation. Those that oppose assisted suicide legislation voices are unwanted. Those opposed to assisted suicide legislation are given short shrift by the mainstream press. We depress people. We want to have a nuanced debate about end of life issues. We want a rational discussion to talk place in an effort to insure all people die well. This is not the sort of discussion people typically engage in. The mainstream press wants powerful and emotional stories. Enter Compassion and Choices replete with great visuals of dying photogenic people with heart breaking stories who want to complete their so called bucket list. The most recent terminally ill person Compassion and Choices has formed a PR campaign around is Brittany Maynard.

I wrote about Maynard and her video and photo shoot for People Magazine. Millions have watched her tear jerking video--it is exceptionally moving. Maynard has a devastating terminal illness. My heart truly goes out to her and her family. There is no question she will die far too young. None of these facts and sentiments are in doubt. In making her death about assisted suicide legislation Maynard chose to become a public figure. She is making the rounds at many news outlets and was recently at the Grand Canyon thanks to People Magazine. Below is a photograph from her trip published by People. 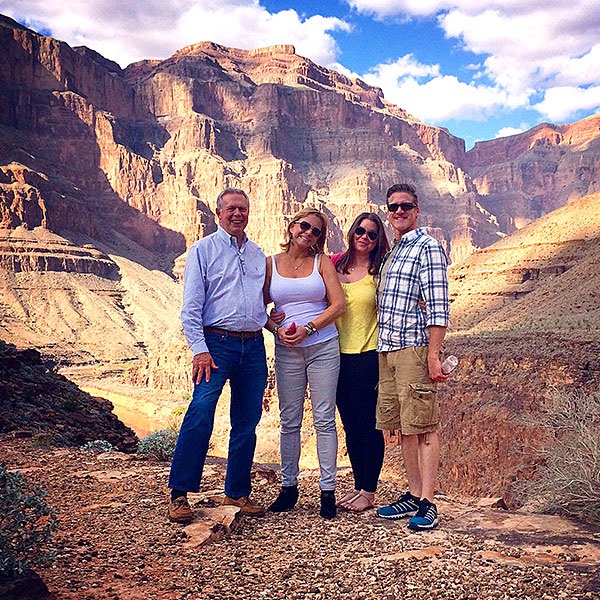 Maynard's story and advocacy for Compassion and Choices can be questioned. She has purposely opted to have a highly visible death. She has foregone privacy in an effort to advocate for assisted suicide legislation for every American. Given this, I think those that agree and disagree can freely comment on how Compassion and Choices is using her to advocate for assisted suicide legislation. Maynard is a political advocate. I find it impossible to believe she and her family are unaware at how influential she is or how powerful the images associated with her life and terminal condition have affected people. Her video went viral and has been seen by millions of people. Maynard via Compassion and Choices has not highlighted the soon to be tragic end of one young woman's life far too young but rather push legislators to pass assisted suicide legislation. To question her motives however is exceptionally difficult. The slightest critique is perceived to be in bad taste. For example, Byock stated: "I think, unfortunately, while not being coerced, she's being exploited by Compassion & Choices, as well as by the media's insatiable appetite for sensationalism. And I think that's a tragedy. I worry what will happen if she--her life still feels worth living on November 1. Will she then feel compelled to end her life in order to meet the public's expectations? I really worry this woman who is vulnerable and going through a wrenching time in life. And I--frankly, I wish her all the best". Like Byock, I wish Maynard the best. I cannot state this emphatically enough. I do, however, object to the blatant political actions of Compassion and Choices and exploitation of Maynard on the part of People magazine.

Brittany Maynard was angered by Byock's gentle critique or the circumstances surrounding her death.  She lashed out with the below comment:

I am Brittany Maynard and it concerns me that Dr. Ira Byock will speak on my "behalf" at all again. I watched a special on PBS where this same individual spoke about my case as though he knew personal details about me, saying some things that were quite frankly not true. For example, he said that a gentle death would be available to me easily through hospice, unfortunately that would be after a great length of time, with lots of suffering (physical and emotional), and loss for my young body. He is right that this is not being accomplished successfully for many terminally ill Americans on a widespread basis across our country. This needs to change too, I agree with him there. But perhaps most disturbingly, Byock claimed that Compassion & Choices had somehow taken advantage of me through "exploitation" and that I feel compelled to die now based on public expectations. I DO NOT, this is MY choice, I am not that weak. The day is my choice, I have the right to change my mind at any time, it is my right. I am very confident about this. This is a patient right that is critical to understanding Death with DIgnity. The claim of exploitation is utterly false considering I had gone through the entire process of moving, physician approval for DWD, and filled my prescription before I EVER even spoke to anyone at Compassion and Choices about volunteering and decided to share my story. I support the organization because I support the cause. I believe this is a healthcare right and CHOICE that should be available to ALL terminally ill Americans. I made my decisions based on my wishes, clinical research, choices, discussions with physicians, and logic. I am not depressed or suicidal or on a "slippery slope." I have been in charge of this choice, gaining control of a terrifying terminal disease through the application of my own humane logic. We as a country have real issues with the way doctors are trained to speak about, educate and embrace realities of death. As a terminally ill patient, I find it disrespectful and disturbing when people discuss my personal health with details that are not accurate to push an agenda. My request is that physicians speak only what they directly know to be factually true and have a right to discuss. The best change for all our community, physicians and patients, will come from us pulling together and developing policies to protect the severely ill based on honesty, education, and humane treatment of suffering. I wish nothing but peace and healing for whom it is available, and a peaceful passing of comfortable choice for whom it is not.
http://thedianerehmshow.org/shows/2014-10-23/new-efforts-expand-options-terminally-ill-patients

Byock publicly apologized to Maynard. Many have come to the defense of Byock. For example, Not Dead Yet released a press statement defending Byock. Link: http://www.notdeadyet.org/2014/10/press-statement-disability-rights-groups-not-dead-yet-and-second-thoughts-issue-statement-defending-dr-ira-byock-in-assisted-suicide-debate.html
Byock is not commenting on Maynard's prognosis or health status. Byock commented on Compassion and Choices national on line video campaign designed to expand existing Death with Dignity Laws. Like Byock, I have the right to disagree with what Maynard has said. What Maynard does not want to acknowledge is that her impending death is, thanks to her decision to join forces with Compassion and Choices, a publicly debated event. Compassion and Choices PR campaign squarely centered on Maynard highlights that no person dies in a social vacuum. Death, especially an assisted suicide, is a social act. Here is what Maynard and Compassion and Choices dismisses: "There is no universally right way for a person to die. What constitutes dying well for one person might be entirely wrong for another. The word 'well' is both an adverb and an adjective. It can describe not only the dying process but, more important, the person who is dying". This quote can be found on page 81 of Byock's The Best Possible Care.

Maynard wants all Americans to be able to die worth dignity. I share that sentiment. The problem is that our ideas of dignity are radially different. Dignity like autonomy can mean many different things.  If I modeled my life around the current Death with Dignity Laws I would not exist. The reasons cited by those that choose to die in Washington include the loss of autonomy and dignity. Others concerns include losing control of bodily functions, being a burden on friends and family and concerns about pain. I have experienced each and every one of the aforementioned concerns. I have lost a degree of autonomy because I cannot walk and use a wheelchair. Many think my life lacks dignity. I have tenuous control of my bodily functions. I have without question periodically been a burden to my family. I worry about the pain I experience and am very concerned about being a burden to my son at the end of my life. You know what this makes me? Human. I am a human being! All life has value no matter how compromised or different. I valued my existence as a typical little boy. I value my existence as a middle aged crippled man. I value all people--typical and atypical. I value medically stable people. I value the last few hours of those alive and approaching death. Every last breathe I value. If you question this go read Dylan Thomas famous poem "Do not go gentle into that good night".
Posted by william Peace at 11:57 AM

I think I had always read Thomas' poem as people who regretted how their life has turned out and are now fighting because they haven't accomplished what they wanted. I also took the last stanza as Thomas seeking affirmation that he never got from his father.

Thanks for giving me a different way to see the poem.

Ben, What an interesting comment. Since I was a child I have understood the poem as rage against death. Thanks right back--you made me think.

Could someone tell me how Maynards death has anything to do with assisted suicide please? The original point of "right to die" was to allow physically incapable people the same choice to kill themselves as everyone else has. Maynard is physically capable of ending her own life, she doesnt need anybody elses help, so why is she being presented as a poster child for Assisted suicide?

The fact that shes terminally ill is irrelevant because shes making this choice at this point when the normal response of society would be to lock her up if necessary "for her own safety". So where are the mental health teams who are usually all over people who express a wish, and certainly a plan, to take their own life? Are they agreeing that her life has no more worth or value now that she has a terminal diagnosis even though that isnt yet destroying her "young body" and health? Do they not have a problem with this public romantisism of suicide over suffering?

I just dont understand, and as one of the people who'd be dispensed of the moment "right to die" legislation comes in, I think I have the right to understand how society decides whos life is worth going against their wishes to prolong and whos isnt. And whether there is any place left for those of us who want to live in spite of the pain, suffering, autonomy loss and inconvenience that our continuing existence causes others.

Why die when you can have gentle end of life care?


Dying by brain cancer is somehow the equivalent of living as a gimp?
Astounding error for a PHd.

Dicho, Your comment is misleading. Equivalent in that disability is feared by those at the end of their life. As such that is a statement about life with a disability.