I love to travel. It is among the best ways to learn about the diversity in the broadest sense of the term.  For instance without driving across states such as Kansas, Iowa, and Nebraska one truly understands the term "America's bread basket". Our cities are also remarkably diverse. We have the fast paced energy of New York City and the cool chill of Seattle and Portland. We have dense urban areas and stunningly isolated ranges like the Wind River Valley in Wyoming. Our national parks are impressive and it is beyond my ability to describe their beauty. Not even Ken Burns multi part documentary adequately showed off the national parks.

There is one constant for me when I travel. Access to mass transportation for a person such as myself that uses a wheelchair is routinely difficult in the extreme. Buses, trains, subways, taxis, planes all needlessly create chaos that undermine the ability of people with a disability  to travel. Airlines routinely destroy wheelchairs. Wheelchair lifts on buses are somehow broken or the drivers refuse to use the lift often claiming ignorance. Accessible taxis are as rare as diamonds in many cities. Subways in the vast majority of cities are grossly inaccessible. Rental car companies often do not have the car with hand controls rented weeks or days in advance. Shuttle buses at airports are not always accessible. Hotel shuttle buses are also typically not accessible. Profound and difficult problems abound. Discount travel is pure folly. Airbnd and Uber have been hostile to people with a disability and been sued multiple times. Hotels usually have a severely limited number of accessible rooms all too often located next to the ice machine, across from the elevator or another undesirable location. Restaurants have what I call "cripple tables", like hotel rooms, the location is terrible.

Clearly the presence of people with a disability when traveling is a problem--an individual problem for which others are ever so sorry exists. I do not want an "I am sorry" I want to be equal to the bipedal hordes that the country is designed for. The lack of access has been on my mind since I left Boston. Unlike the NYC subway system, the Boston T is remarkably accessible. About 80% of the stops are accessible. In NYC I would guess at most 20% of MTA stops are accessible. Essentially the NYC subway system is useless if you use a wheelchair. I do not even bother to consider it as an option. This graphic more than my words highlight just how bad the NYC subway is in terms of access.

First, the MTA map for bipeds: 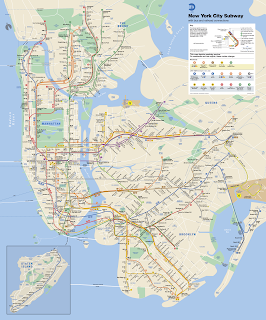 Now a map for the MTA accessible stops. This does not take into consideration all the broken elevators which is a sizable percentage. 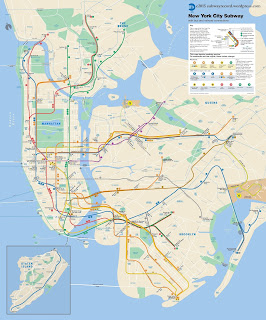 I have looked at the maps above for over a month. I shake my head in wonder and concern. How is a poor or middle class person using a wheelchair going to get to work on a timely and inexpensive way? In NYC it is not the subway system. If you use a wheelchair and want to use the mass transit system in NYC the bus is the best option. MTA bus drivers may not be friendly but they rarely complain about operating the wheelchair lift. No mass transportation system is ideal.  My only complaint with the Boston T was the elevators. They are filthy and the stench can be overwhelming. Worse, they are used by some as a toilet or a place to smoke pot and crack. What I felt in Boston using the subway was freedom. I had the freedom to get from point A to point B quickly inexpensively and efficiently. The only other city I could say the same about is San Francisco and BART. The fact severely limited mass transportation options exist helps explain in part why so many people with a disability are unemployed--a number that has not changed since the ADA was signed into law. So pardon me if I remain cranky about all the ADA parties, marches, and heaps of praise the law has received the last few weeks.

My good friend and colleague Stephen Kuusiso is like me in that we are both weary of ADA celebrations. Life for we people with a disability is hard. This is not a woe is me observation. It is simply a fact. In Kuusito's blog Planet of the Blind he recently wrote he is a "sour puss".

I feel as if the celebrations are taking place while Rome is burning. What a sour puss!
As of today, only 25% of college students with disabilities actually graduate.
As of today, 70% of the disabled remain unemployed.
As of today, airlines destroy wheelchairs in transit at alarming rates.
As of today, public transportation remains marginally accessible in most cities.
As of today, I could go on and on…
Sour puss indeed.
“But Kuusisto,” you say, “haven’t we made significant progress since 1990? Can’t you see that?”
I’m not sure.  Most businesses and universities think of the ADA as “an unfunded mandate” and treat it with disrespect.
Progress. How we Americans love progress. Progress and the ADA do not do much good for the person with a  disability that wants to travel. If I fly to Chicago, Denver, Seattle, San Jose, New Orleans and dozens of other cities and ask a myriad of people how can I get from the airport to downtown the most common reply is "I have no idea". I find this unacceptable. So please let's stop talking about how great the ADA is. The ADA was a start, nothing more than a start that has not been supported by the general population of the United States. What I hear again and again is the ADA is an unfunded social mandate. This disturbs me. The ADA is Civil Rights legislation designed to protect the rights of people with a disability. Frankly, the law is weak, poorly written, and ignored. I am not happy and will continue to express my displeasure. Screw the ADA parties. Go form a protest, practice civil disobedience and make the nation accessible to all. The ADA sure has not been all its cracked up to me.
Posted by william Peace at 11:35 AM