I have lived in the Franklin Square area for two months. The move has been great for me. I doubt I could have survived in my old place because it had no air conditioning. Urban life appeals as I walk all over the city of Syracuse. The city is gritty. I like Syracuse gritty. Industrial era buildings are being repurposed and turned into apartment buildings. Even those buildings that have not been renovated have a certain charm and provide a nod to long gone industrialism that dominated city life. I live in a building that was once an iron factory. I often wonder about the people who worked in this building. What would they think the once mighty industry is gone and repurposed into an apartment building?

In my estimation, the immediate area where I live is a model of development. However, there is one problem I encounter daily. The curb cuts that abound do not remotely meet ADA standards. They are brick and steep. This does not usually present a problem but I do wonder about the winter. I assume I am going to be doing a lot of curb cut snow shoveling. I don't mind this. What I do mind is depicted below: 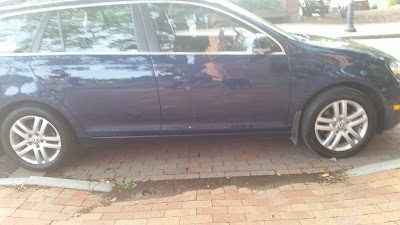 Without question, curb cuts around me are not well marked. I use this curb cut every day I go outside and I am outside at least three to four times a day. Every day, and I do mean every day, curb cuts are blocked. There is a popular coffee shop on my corner and everyday this curb cut and many others are blocked by parked cars. This is not a rarity, it is the norm. Aside from cars, every imaginable delivery truck also blocks curb cuts. In gritty Syracuse a host of curb cuts are either entirely absent or in such a state of disrepair they are not usable. Every day I end up in the street. Today is was a clean VW jetta station wagon. Yesterday it was the absence of a curb cut. The day before it was a blocked off sidewalk. And the day before that is was a mail truck. A variation on this theme are cars that block the pedestrian crossing at a red light. This means I must meander into incoming traffic to get around the car.

The skeptic is thinking: get over yourself. The person that parked the car depicted above just went to get a cup of coffee and did not notice they blocked the curb. This is likely true. The same can be said for a myriad of delivery men who are pressured to make a certain number of deliveries per day. Excuses abound. Let me frame this differently. Why do people not notice curb cuts? Why do really nice people not notice? The answer is they do not care. Curb cuts are not valued. The people who use curb cuts are not valued. Those that are not valued include a host of people. I know my life does not in the estimation of many hold any value. Just today I read about a woman in California who was among the first to legally access assisted suicide. She wrote: I am losing strength in my arms and hands quickly. I don’t want to live out my life paralyzed, eating through a tube in my stomach and communicating through a machine. I’d rather be free than entombed in my body. I find such statements shocking. By extension am I "entombed in my body". The answer to this question is yes. This takes the devaluation of my people to a level that is a direct threat to my existence. These words make me wonder when will another mass murder that took place in Japan happen here.

Again the skeptic objects. How did you get from a curb cut to mass murder of people with a disability? Ableism is a spectrum from the innocuous to murder. Ableism exists because we see any and all things related to disability as a perk. Donald Trump crows he has given millions to the handicapped and made all his buildings accessible. Bull. He made buildings accessible because it was required by Federal law. So called "reasonable accommodations" are rarely if ever framed as a matter of civil rights. Ableism exists because ignorance with regard to disability is rampant. Like the blocked curb cut, ableism is encountered daily. And oh how typical others love to rail against the ADA. People have made journalistic careers undermining the ADA. Last week I read about a man in California that had filed hundreds of ADA complaints against small businesses. He is making money off the ADA proclaims those being sued. I don't like these people any more than typical others. But stop, please stop. Think about it. If ADA violations did not exist corporations and small businesses could not be sued. ADA fails abound. ADA fails are everywhere. I see them daily and simply shrug. I shrug because typical others don't care. As Mary Johnson wrote he her book Make Them Go Away, no one wakes up thinking I will be an ableist bigot and discriminate against people with a disability. Yet this does not mean typical others do not discriminate against people with a disability on a regular basis. I have sat through an untold number of meetings about access issues. I am typically the voice of dissent. I make people uncomfortable. Yes, typical others will cluck about being inclusive but when it comes down to the bottom line, meaning money, access is the first line item cut. It is the easiest cut to make. It is easy because typical people do not value the inclusion of people with a disability. Oh they will cluck about it for sure but in reality inclusion is seen as a choice. We will be inclusive if inclusion is not too costly. Health insurance companies produce glossy ads that depict the vulnerable such as the elderly, ill and disabled but will fight tooth and nail to provide the least amount of treatment and purchase substandard wheelchairs.

The photograph above and blocked curb set me off today. I know where I rank. I hate it with passion. I have spent my adult life fighting the good fight. I will continue to fight. This fight is not about me. The fight for equality is about the person walking around today who by bad luck or happenstance acquire a disability. Yes, I fight for the ableist too. We cripples are after all the only minority group one can join unwillingly. The next time readers are in a position of power and see access issues get short shrift I suggest this is not in your best interest. Let that little idea sink into your craw.
Posted by william Peace at 8:08 AM