Soylent Green and Assisted Suicide as a A Life Style

About ten days ago I wrote about Betsy Davis who ended her life and in so doing created an elaborate "Rebirth Ceremony". Link: http://badcripple.blogspot.com/2016/08/assisted-suicide-life-style-choice.html She was among the first people to use California'a euphemistically titled End of Life Option Act. Let's drop the pretense and describe the law as is: assisted suicide legislation. A few days ago an online magazine I read, Vox, published a "Rebirth Ceremony" party goers personal account of the party. As you would expect, I was appalled and taken aback that Vox published the story. Link: http://www.vox.com/2016/8/22/12552940/assisted-suicide-california The long essay gushes over how sad and wonderful the ceremony was. It is replete with a description of a fashion show in which party goers try on Betsey's clothes. Yes, the author apparently fell in love with a vibrant red Donna Karen wrap dress that was difficult to figure out how to wear. Here is the dress in question gayly worn by the author 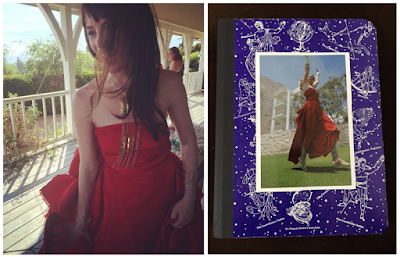 Betsy you see has ALS and is terminally ill. Clearly, she could never enjoy wearing such a "frock". I breathlessly read that "Betsy groans in frustration. She's unable to talk because she is in the final stages of ALS, a neurodegenerative disease that is slowly depriving her of the power to move, speak, eat and breathe. Like many of the 30 party goers who flew in for the "Rebirth Ceremony" I am supposed to be impressed with the shindig. Many details are included. A random sampling:

It hadn't occurred to me that assisted suicide could be wrong, because it was clearly what Betsy wanted.

My friends and I rented a house in Ojai, close to Betsy's, for the weekend. We understood our job was to have as much fun as possible.

From 5 to 7pm we would drink cocktails while picking out Betsy souvineers from her remaining belongings--everything must go.

A Tesla Model X with Falcon wing doors was at the ready to transport her to the ceremony site.

We were instructed to walk up a hill to a vista where white shade tents, a massage table, and an alter stood before white folding chairs--once again like a wedding. She was lifted into the Tesla X, laughing with joy as the Falcon doors closed, radiant in her blue and white robe. Despite our collective concern, we cheered her on as she was wheeled into the ceremony site. Lots of hooting and hollering, as if she'd just kissed the bride.

The above reads like something on page 6 of the New York Post tabloid wedding section in which two movie stars get married. This is not a spoof. This is very real. All week I have been thinking this is akin to a science fiction novel. Surely a person with wealth and power and the ability to have 30 people fly from across the nation might have put some energy into a little thing called life. Perhaps she did. I have no idea. A few things are a given in this story. ALS is certainly a fatal condition. Those who are terminally ill will die for certain. They will acquire an unwanted and horrific disability. Living connected to machines is a fate worse than death. Those unidentified machines are most likely a feeding tube and ventilator often referred to as life support. The focus here is on the drama of death. As I wrote ten days ago assisted suicide has become a life style.

I have thought long and hard about the classic 1973 science fiction movie Soylent Green. It starred young and old actors alike--Edward G. Robinson, Chuck Conners, Charlston Heston and others. The film was set in 2022 New York City. The population of earth experienced run away growth and New York City had 40 million residents. The city was encased in yellow haze of pollution. The worlds natural resources were depleted and people lived in filth.  Heat waves were rampant and tormented the population. Poverty was wide spread world wide. Corporations replaced ineffective governments and corporations ran all social services. The Soylent Corporation provided meager amounts of food in the form of wafers of "Soylent Yellow" and "Soylent Red". In 2022 a new product is released--"Soylent Green". It was made from ocean plankton. Real food had long since been forgotten. Only the fabulously wealthy ate precious commodities like vegetables and meat. Water too was in short supply. Riots took place frequently. For those that remember the film, this dystopic setting was perfectly imagined. Spoiler alert for those that do not recall the film. The most famous scene in the film is Charleston Heston yelling in agony that "Soylent Green is made of people" as he is carried away. I recall a different scene. I remember Edward G. Robinson known as Sol or "Book". For Soylent Green is made of people--people who seek out assisted suicide. It is a culture of death not life. And please do not misinterpret those words. They are rational and devoid of any religious connotations.

I cannot fathom how we as a society ignore rampant ableism and embrace death as a life style choice. This is not science fiction but reality. I know when I enter my class, Bioethics and Disability, next week every student will be in favor of assisted suicide. That is the norm these days. Assisted suicide has become a given. I suppose assisted suicide reflects the American penchant for valuing independence and control. Both are defined in the narrowest sense of the term. If you can't get out of bed independently, dress yourself, and perform the usual activities of daily living your life is inherently inferior if not worthless. This cursory line of reasoning falls flat for me. In reality ableism knows know bounds. It is a lethal ism. Lives are at stake and that includes mine and millions of others. This reality keeps me up and I am reminded of the bellow scene in Soylent Green.

(I enjoy your writing very much. My disability is Becker Muscular Dystrophy.)

When I was younger I thought not being able to perform ADLs independently was a fate worse than death. Now I realize I could be happy with such a life. I wouldn't mind a machine breathing for me or feeding me, but being "locked-in" and unable to interact effectively with the world seems like a fate worse than death currently. I suppose I will get past this locked in fear in time as well. If you were locked in and could not move at all, you might live on to see a new sunset or hear a new song.

My question is this: What if your all senses were completely cut off as well? Being trapped with only my own mind for company and never being able to experience anything new? At that point assisted suicide seems like an option I could reasonably choose. What about you? If you would choose to live on in such a circumstance, why?

Another way to approach the assisted suicide bs is to really see it as an option for unfit members of our species to gently and quietly excuse themselves from the gene pool. Of course give empathy where it's due as horrible disorders and diseases exist. Or maybe consider this as an expression of the selfish gene in some odd manner.
Maybe I'm optimistically half empty.