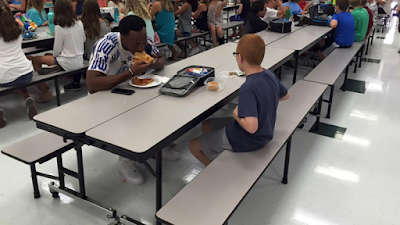 The image is striking for one reason. A student is sitting very much alone with Rudolph. No doubt the man in question was kind. I think every human that endured middle school remembers that awkward and often terrible time. Middle school can be a cruel place. I vividly recall being bullied in middle school. I was an easy target. Any kid with a disability was and remains an easy target for bullies. For years I wore a Milwaukee Brace. One steel bar was in the front and two steel bars formed the back. Kids in middle school thought it was hilarious to trip me as I neared a ramp where I would land on back and slide down the ramp. I still feel the humiliation. I also recall teachers thought this was funny as well. There were no offers of help. I was on my own. I suspect this has not changed.

Not one news story asked a basic question: why was the student sitting alone and totally isolated? Why was this student alone in a sea of students and tables? Was this by choice? Did the student want to be alone? Was he sitting alone because he was being shunned? Does he eat alone daily? Why was Rudolph praised for displaying basic human kindness? Was every student at Montford Middle School cruel to Bo Paske? Does the boy have any friends? What is it like to have autism and be in middle school? Surely cafeteria workers saw the child completely alone. Why did they not step in? This is yet another story of how the media misrepresents disability rights. No child should be forced to endure social isolation.
Posted by william Peace at 11:11 AM

Actually, as an autistic person, I question the kindness. There's an even more basic question no one seems to have asked: was Bo sitting alone by choice?

I ate lunch alone almost every day at school, which was fine. Sometimes other children joined me, at the urging of teachers. They ridiculed me. So certainly, alone was preferable to that. But alone can also just be better. A chance to think. A time not to have to deal with verbal interactions and social processing, which can both be stressful.

I take care of autistic children, and often their parents or teachers worry "he spends recess alone." And I do something no one else ever seems to think to do. I ask the child how they like to spend recess. I get some kids who want to join in and don't know how. Those are kids who need adult support to facilitate interactions. But I also have the child who prefers to spend recess playing math games on the computer or walking around the playground looking for rocks. Recess and lunch should be breaks, not more stress. Those are kids who need adult support to understand and respect a choice.

I don't see this as an act of kindness at all. It may be, if the child wanted company. But it may also be in the same category of ableism as all the other offers and enforced "help" that doesn't actually help. It's an imposition of neurotypical values that company is better than alone.

I think it might also be, in part, an imposition of extrovert values on introverted people and a mind blindness issue where the extroverted non autistic people just assume that being alone a lot is unhealthy and lonely because that's what it would mean *for them* and fail to realize that different people genuinely have different needs.

I do recall reading that the mother stated that her son is autistic and often sat alone while eating his lunch. From what she implied, it seems that he was sitting alone not by choice.

Yes, as a child his age I ate my lunch at a table by myself, which was by arrangement as all the other kids sat at the same table. I wouldn't have wanted other kids with me although I'd have appreciated an adult. I don't know how that boy felt or the reason he sits alone, but everyone's assuming it was because nobody wanted to sit with him rather than the other way round.

The kid's statement to his mother about this incident was, "It was like sitting on rainbows." I don't think he was sitting alone by choice.

As all comments here indicate a core issue was the student sitting alone by his own choice.

Autistic people often seek time to decompress and they do this by spending time alone. I did. I ate my lunch alone every day and actually needed that time to handle the rest of the day. :)

Mr Rudolph asked the boy if he could eat lunch with him, to which the boy replied "Why not?". So I think that can be interpreted as a welcome gesture, and the boy was even excited about getting his autograph, so I say well done on the part of Mr Rudolph!

... so there you have it! Is this really the world we live in? From the mother's own statements, is seems that Bo did not eat alone "by choice". But what do "we" do, we question the kindness. As the parent of a son on the Spectrum, I would have tracked this athlete to the ends of the earth to express to him how much I appreciate his gesture!

For those of you questioning his motives (apparently because he doesn't have autism, or an advanced degree in early childhood psychology, a crystal ball, or a secret decoder ring), know this. The next time a neurotypical DOESN'T make such a gesture, maybe it's because they were afraid you would assume they had an ulterior motive!