Every Day Ableism, Ignorance and Hate

Tuesday was not my day. I went out to have lunch and do errands. Simple. Not really. I tried to exit my building and a large moving van blocked the ramp and side walk. I wait 15 minutes for the movers to return. They were nice and apologetic. I walk to the nearest corner. Each and every curb cut is blocked. If I want to get to where I am going I will need to navigate in the street. This is a risk and in the back of my mind I recall a wheelchair user was hit by a car and killed not far from where I live. The risk I tell myself is manageable. More blocked curb cuts await. I am forced to go three blocks out of my way. It has taken me over 30 minutes to go what should have taken less than 5 minutes. Disability is a time sucker of epic proportions.

It is the summer and without students on campus and multiple road closures, many bus routes are detoured. No one quite knows where the bus will be on a given day. Not to worry. I have memorized the route. I walk the bus route itself and eventually a bus will come by. Of course this works when the weather cooperates. Yesterday was one of those cooperating days. Upon meeting a friend for lunch yet another curb cut was blocked. I enter the street yet again and ask the men in a huge garbage truck to move.

After lunch, I meandered my way home. Among my errands was a stop at the pharmacy. Three blocks after I went to the pharmacy my urban radar went off. A hundred feet later I know I am being stalked. I can feel the presence of another person who is failing at being stealthy. Next thing I know out of the corner of my eye a hand comes over my shoulder to snatch the plastic bag off my lap. Luckily for me the hand comes over my right shoulder. As I see the hand I spin very hard to my right and take my forearm and slam down on the stalkers elbow as hard as humanly possible. Two things happen at once. The frame of my wheelchair hits the man in the shins--that hurt for sure. At the same time my forearm forcefully connects with the man's elbow. The man looks like a deer with his head stuck in the headlights. He is shocked. I am not the easy mark he assumed I was. I am quite pleased with myself. The man yelped and ran away down a nearby ally. Unbeknownst to me a building security guard witnessed what took place. He was impressed. We chatted a few minutes about crime in Syracuse and we joked that guy is never going to try and steal from a wheelchair user again. After a moment of silence we agree crime and drug addiction is rampant in the city. The man likely followed me from the drug store. I am not sure if I am sad or angry or simply vulnerable.

Nearing home I stop in the shade near the fountain in Clinton Square. It is a pleasant place to stop. As I attempt to find my inner Zen, a well dressed man comes up to me. My radar is yet again going going off. He said "I know the handicapped are poor. You must be poor. I am going to buy you food. What do you want to eat"? My first thought is he thinks I am a homeless guy. But no. I look pretty good today. Indeed, I have made a concerted effort in the last few weeks to look neat and clean. I am essentially prepping for Yale. Being the worst dressed professor at Syracuse is one thing but quite different at Yale. Not a chance I look like a homeless person. I replied in a non confrontational manner. "No thanks. Leave me alone". The tone of my voice I think made it clear I wanted to be left alone. Mercifully the man did as requested.

Tuesday was atypical. However, street harassment is routine when I have the nerve to walk around the city alone. What I find unusual is that routine harassment has taken a decidedly nasty turn in recent months. This happens when the American people elect a demagogue to the presidency. Each day brings one shocking story after another. A war is being waged and like other vulnerable people I am in the cross hairs. When Trump was elected I instantly thought those that voted for him were filled with hate and ignorance. My views have not change one iota. Half the population of this nation have embraced a draconian view of the world. That world does not include people with a disability, the poor, elderly, and any person that does not conform to a very narrow norm. That norm is predicated on one being an employed tax paying member of society. If you need social supports and an education well that is trouble for we are entering an era of ruthlessness that is as bald as it is ugly. Trump's budget is without question ruthless. Link: https://thinkprogress.org/trump-budget-disabled-people-f2a4708074f0 The only solace I find is that many others share my views. One person in particular is on an impressive roll writing about the current political climate. The always fascinating Lance Mannion wrote:

They hate us. All of us. The budget makes that plain. Before it’s a financial or policy document, it’s a manifesto. A declaration in numbers of how much they hate us.

They hate the poor, that's obvious. They hate and despise and fear the poor, especially if they're brown. But they hate the sick too. And the old, at least everyone irresponsible enough to get old without having put together a $500,000 portfolio. They hate children. Other people's children, of course. They dote on and spoil their own. But other people's children are coddled and raised to think life owes them so those kids need to be taught a lesson. They hate everybody who isn't rich because we should be rich. That's what life is for. To make money. Lots of it. And if you didn't do that you've wasted your life. If you didn't do it it's a sign you didn't try, you didn't work or work hard enough. It's a sign of your bad character and moral failure. And that's what we all are in their eyes, moral failures who expect them to bail them out when our bad character gets us in trouble. Even if we aren't constantly coming to them with our hand out in one way, we're doing it in another, demanding we be paid more than we're worth, demanding benefits we haven't earned or deserved.
We're all thieves and parasites, moral failures, degenerates and defectives. Sinners! Sinners against God and Nature and we must be punished. Link: http://lancemannion.typepad.com/lance_mannion/2017/05/they-hate-us.html
Unimaginable. That word springs to mind on a daily basis. I fear I am the Mad Hatter. Lewis Carroll never used those exact words in Alice's Adventures in Wonderland. The phrase used, "mad as a hatter" predated Carroll's writing. The popular image however seems apt. 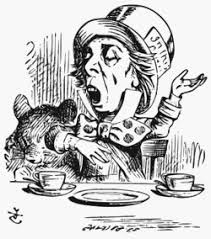