Arrests: Past and Present

I have never been arrested. I have avoided arrest for my own physical safety and a more personal reason--any arrest would have deeply upset my parents. My desire not to get arrested however does not mean I was unwilling to push the envelope. Immediately after I was paralyzed in 1978 I got a crash course on stigma before I read the work of Erving Goffman. I was miserable those first few years of paralysis. I was not miserable because I was paralyzed, I was upset with my social fall from grace. I went from being the heroic sick kid to medically stable paralyzed man trying to navigate a hostile world. No more would I be able to attend a concert, sporting event, or any large public gathering without calling a special number and be relegated to the worst seat money could buy (that is if I could even enter a venue).

I did not react well to being stigmatized. I pushed back and did so with vigor. This won me no friends. Indeed, I was failed miserably at being the subservient cripple I was expected to be. The notion of disability rights did not exist and I was thought to have "a cripples disposition". The result was I got kicked out of more than a few baseball stadiums, hockey rinks, and concert halls because I let organizers and ushers know handicapped seating was unacceptable. This has been on my mind because I am not sure much has changed. Prejudice and social isolation people with a disability experience today is different. I tried to do the ordinary on gorgeous Sunday afternoon here in Denver--go to a baseball game at Coors Field (the stadium is accessible). I looked for tickets online at StubHub and the Coors Field box office. StubHub had about 3,000 tickets available the morning of the game. When I put the filter "handicapped seating" on the search engine tickets available went from 3,000 to zero. The same thing happened at the Coors Field website. About 2,500 hundred seats were for sale. When I applied Coors Field "semi-ambulatory" filter no seats were for sale. Simply put, there are softer means of exclusion that are quite effective these days.

Another reason I have not been arrested is because in the 1970s it was simply unacceptable to arrest a person using a wheelchair. The visual of police officers arresting a wheelchair user was not something the general public was prepared to accept. I know this to be true because I was almost arrested at Yankee Stadium in the fall of 1978. I was a college student and had attended a few Yankee games. The Yankees made the World Series and my father got me tickets to the series. When I showed up to the stadium the lousy area that had once been designated "handicapped seating" was filled with television cameras. There was no handicapped seating and the usher suggested I either leave or watch the game from a stadium bar. The cameras I was told were not going anywhere. In anger I went over to one of the expensive television cameras and tipped the tripod over. The camera smashed and broke. I was immediately surrounded by angry television people and ushers who called the police. The police showed up in seconds. I was put in handcuffs and the police escorted me out of the stadium. Two weary New York City police officers were not impressed. As soon as we got out of the stadium one cop said "What the fuck am I supposed to do with you? The precinct is not accessible. I am not going to take you to Rickers Island. If I bring you in I will never hear the end of it." With that short profane soliloquy he took off the handcuffs and told me "Get the fuck out of here. But if you come back I swear to God I will figure out how to arrest you". I took this officers advice. I vowed to never return to Yankee Stadium and always root against the team.

Much has changed since 1978. The police have no qualms about arresting people that use wheelchairs. Indeed, wheelchair dumping is not uncommon. Link: https://www.sfwar.org/pdf/SurvWDisab/SD_CPunch_2_08.pdf  The visuals of arresting people that use a wheelchair remains socially and symbolically significant. To this day, our penal system is ill-equipped to provide the most basic reasonable accommodations to people with physical disabilities that get arrested. Remarkably, people with a disability had to fight for the right to be arrested. This seems strange at first glance. However, John Holland (an important Denver based disability rights lawyer), pointed out after the first Gang of 19 protests that it is impossible to have a civil rights movement if you cannot get arrested. Let me explain how this came about. Only July 5 and 6th 1978 the Gang of 19 brought traffic to a standstill in Denver when they surrounded two RTD buses at the intersection of Colfax and Broadway. This intersection is the epi-center of bus traffic in the city. The protest did not appear out of nowhere. A good history of this event and the inception of ADAPT was done by Rachel Maddow last year. Link: https://www.msnbc.com/rachel-maddow/watch/gop-threat-to-medicaid-threatens-liberty-of-millions-of-americans-974159427845?playlist=associated

RTD had been negotiating with the Atlantis community for more than a year about expanding accessible bus service. In 1978 RTD Denver purchased 254 buses--none were equipped with wheelchair lifts. RTD had just 12 buses with wheelchair lifts to transport an estimated 6,000 residents who used wheelchairs. The July 1978 protests were unlike any past disability rights actions. Imagine the scene: 75 to 80 wheelchair users surrounded two RTD buses during the morning rush hour and brought traffic to a standstill. Police and RTD officials had no idea what to do. The idea of arresting a person using a wheelchair was unimaginable. The police did not want to be the fall guys as the optics were terrible. On the second day the police had to do something. Some proposed deputizing ambulance or EMS employees and taking protesters to the local hospital. One thing was clear though: no person using a wheelchair would be arrested. Instead, attendants working with the protesters would be arrested. John Holland took the city to court and argued arresting the attendants and not the protesters was an equal protection violation. Holland brought the Gang of 19 and all protesters to the court in what must have been quite the scene. Holland argued the police conspired to arrest able-bodied attendants. This, he argued, violates the constitution because they are selectively enforcing criminal law. All charges against those arrested were dismissed. While municipal violations are not typically important the dismissed charges were significant. People with a disability proved they could and would be arrested.

Today, the police are very good at arresting people that use wheelchairs. In 2017 the police got plenty of practice arresting people with a disability who staged protests against GOP cuts to Medicaid.  Like 1978, the visuals of a person being dragged from their wheelchair, carried out of buildings, or with handcuffs on remain visually striking. 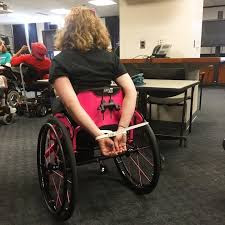 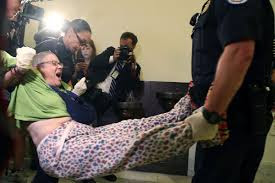 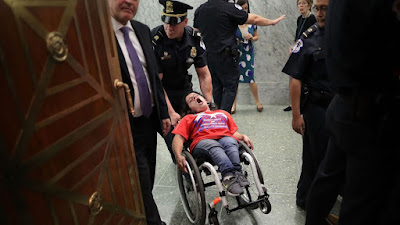 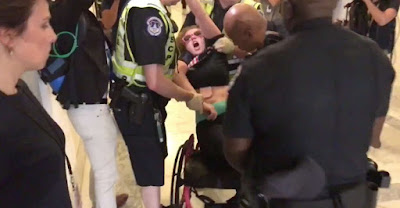 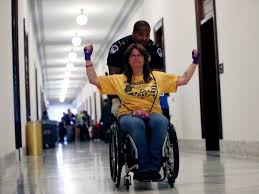 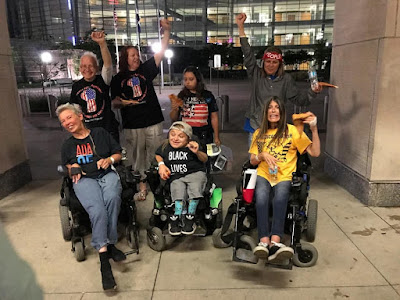 Each time I see these photographs I shudder. I shudder because long hours of fruitless negotiating took place well before arrests were made. Ableism can be a brick wall and in response groups like ADAPT play hardball. Confrontational disability advocacy brokers no deals. There are no grey areas or compromise. I get this at my very core. For much of my life nondisabled others have repeatedly told me they have my best interests in mind.  When I hear this line I know I am screwed. Equal access need not involve a longwinded story. The answer is black and white--when asking about access the answer is a simple yes or no. We people with a disability are not in any way shape or form special. Our so-called "special needs" are not special at all. We people with a disability want to do the ordinary. This is why I chuckle every time I come across a Denver Public Library exhibit about the origins of the disability rights movement. ADAPT had a wonderful bumper sticker as part of it "We Will Ride" campaign.

Posted by william Peace at 5:16 PM