I had a long week. I did my usual Syracuse routine--kind of. I extended my stay in Syracuse one day to get caught up with work. I planned to spend Wednesday night in Toronto with a friend and a give a talk at Western Ontario King’s University College. Plans changed as the major snow storm on Wednesday made the roads too treacherous to get to Toronto. I found a cheap motel near the border and reveled in the silence and beauty such storms bring. Below is what the interstate looked like before the conditions got really bad. 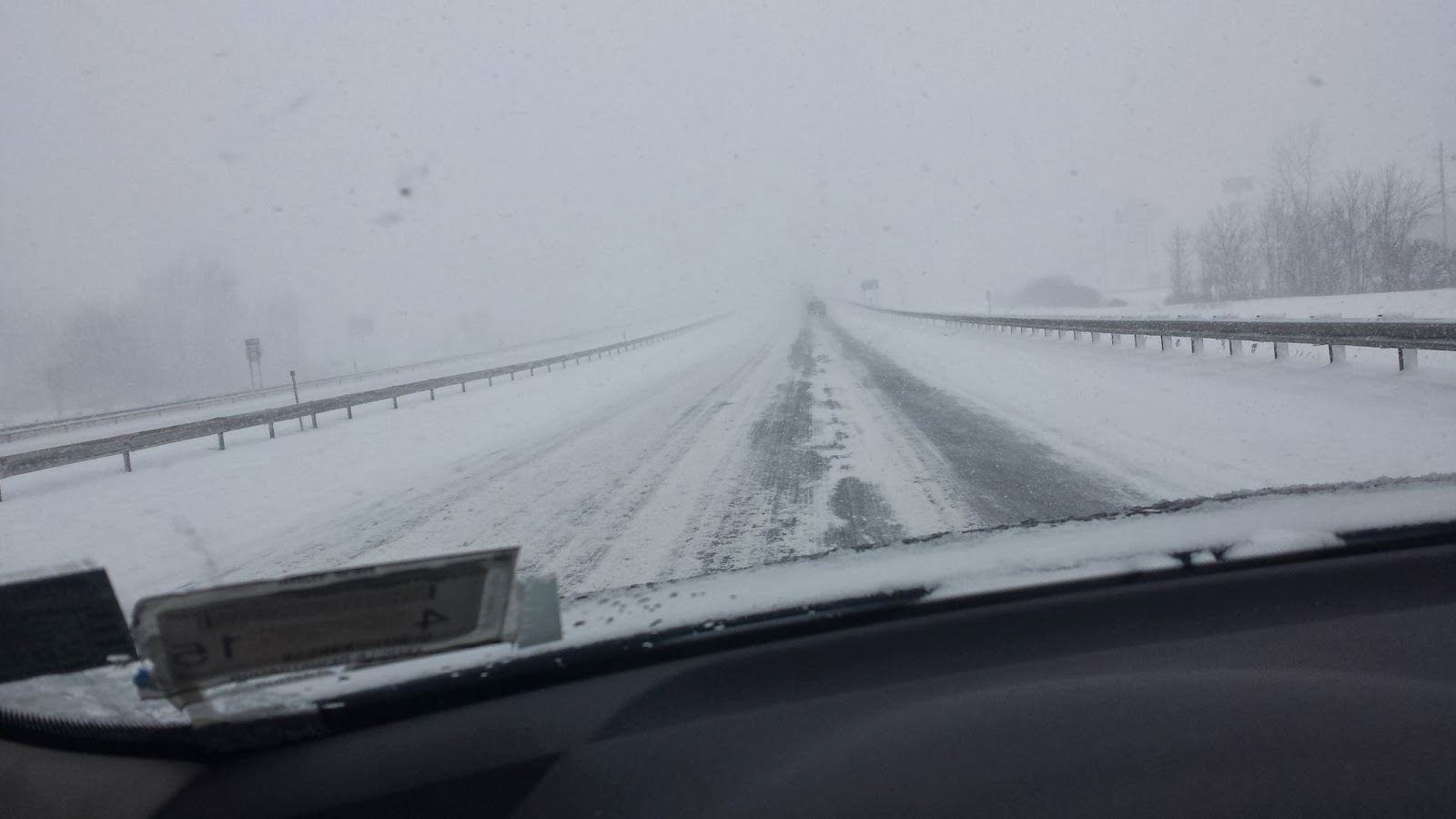 At a personal level this trip worried me. I was returning to London Ontario for the first time since last fall. London, I once thought, would be the place I would live happily ever after. This was not meant to be and I am relieved my worries were misplaced. I felt exactly what I had hoped I would feel entering London. Nothing. This was merely an ordinary trip, one of many I have made in the last year. Perhaps ordinary is the wrong word. Ordinary and travel when one uses a wheelchair are usually incompatible. Something always goes wrong when I travel--it is the norm. This trip it was the hotel. Despite three emails confirming the room I requested was accessible when I arrived at the Ivey Spencer Leadership Centre there was no record of such a request. I was told all handicapped rooms were occupied. The usual confusion commenced. Much head scratching took place. Many sorries were expressed. Phone calls were made. Managers were sought out. A great deal of time was spent looking at a computer screen. After more than 20 minutes an accessible room was found in the north wing. But the north wing I was told was remote. This word fits as the "leadership centre" is a corporate retreat set on thirty acres.

I suggested I look at a typical room and the supposedly accessible room. After a long walk to an obscure part of the hotel's north wing I am shown the accessible room. With my hotel employee escort I enter the room and laugh. The room is very small as in the size of a small single dorm room. But what makes me laugh is the bathroom--it is grossly inaccessible. The bathroom door opens inward and blocks any possible access to the tub (a roll in shower is  pipe dream). I am presented with an accessible room circa 1978. A grab bar is next to the toilet. That is the start and end of wheelchair access. Even the hotel employee is stunned and acknowledges the room is not in any way accessible. We retrace outsteps to the main desk to look at a typical room. It is more accessible than the designated accessible room. By accessible I mean I can enter the bathroom but any transfer in and out of the tub or on the toilet is going to be an adventure without grab bars. At this point an hour has passed; I have not eaten, and I am not inclined to start driving around looking for another hotel. I take the typical room knowing the university is spending $100 put me up in a hotel I cannot take a shower in. Welcome to my world of "routine" travel.

My talk went well. I met with Pamela Cushing and her class. I was tasked with discussing media representation of people with a disability in advertising, specifically commercials. The student were excellent. They were engaged and had clearly done the required reading. They asked interesting questions and I was thrilled to be exposed to Canadian university students. Much of out time was spent discussing two commercials: one I liked and one I dislike.

First the add I disliked as it falls into the category of "inspiration":

I have not deconstructed this commercial for two reasons. First, Rachel Cohen Rottenburg beat me to it. I am thankful for this because I know after she critiqued the commercial she got a lot of severely critical comments. See: http://www.disabilityandrepresentation.com/2013/09/04/3087/  Second, the commercial with a few changes could have been a classic and as such it is a wasted opportunity.

The second commercial features Derrick Coleman the only deaf football player in the NFL.

Once again Rachel Cohne Rottenburg beat me to the punch. I urge you to read her analysis of the commercial. See: http://www.disabilityandrepresentation.com/2014/01/17/the-new-derrick-coleman-duracell-ad/  Like Cohen Rottenburg I was struck by the word play. Not an ounce of inspiration exists in this commercial. The line that resonated with me was "They told me it could' be done. That I was a lost cause. And picked last". This will resonate with every person I know my age with a disability. We were repeatedly told what we could not do do. Physicians always compared us to a norm that was impossible to obtain. Teachers told us we were "special" and did not have to study. Our typical peers took delight in torturing us. Rocks were thrown at the blind kid. I was "ironsides", belittled and laughed at. We pre ADA cripples fought back. We did not listen to others who told us all that we could not do. We rejected the mainstream and normative assumptions. We did not overcome our disability. We overcame the stigma and spoiled identity associated with disability. In a multitude of ways we spearheaded legislation designed to protect our civl rights.  None of this made us popular. As I made the long drive home yesterday from Ontario I thought a lot about how can I foster social change. How can I insure the rights of people with a disability are respected? How can I help not myself but the next guy that will encounter a physical or social barrier. I struggled with this notion and at one point decided it was hopeless. Then I got mad and thought I will not buckle. I will not go quietly into the night. Other people with a disability fought back. Wars I know start with minor battles. This in turn made me think back to one of the first pitch battles to make buses accessible. In Denver a group of about 60 people with a disability started a movement that would sweep the nation. Only July 5, 1978 at busy Denver intersection 45 people, most using wheelchairs surrounded city buses in protest. For the first time people with a disability let it be known we were taking equal access seriously. Part of that seriousness involved access to reliable mass transportation. This protest took place a few months after I was paralyzed. I owe these men and women a great deal. When I was in Denver a long time ago I went out of my way to pay homage to what became known as the "gang of nineteen". A small plaque exists: 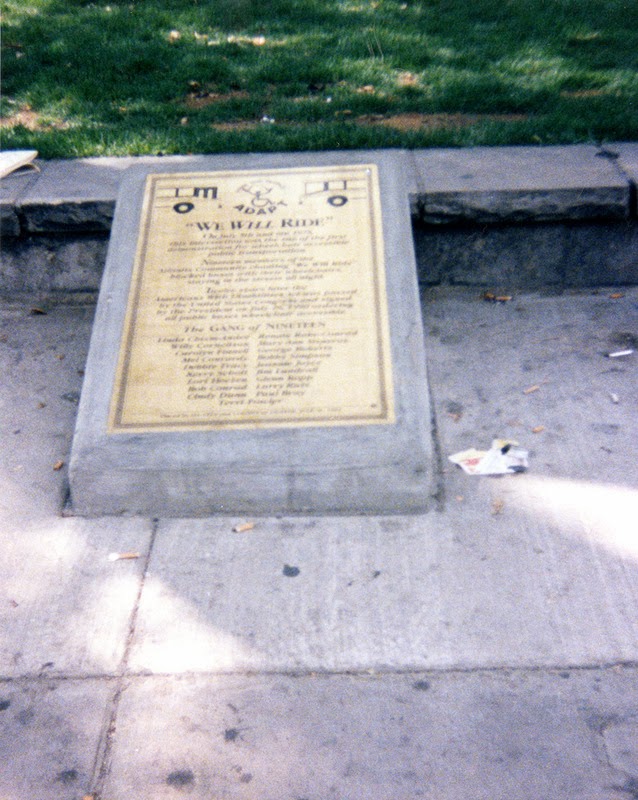 When discouraged I find inspiration in the acts of other people with a disability that like me reject all they have been told about what cannot be done. This is not a minor difference but rather reveals a significant cultural divide. I do not care one iota about what I cannot do. I am only concerned with what I can do. When I see a person with a disability I do not think about what they cannot do. I think there goes a hard ass survivor. I wonder what has that person accomplished and how did they do it because I know all to well it was not easy. I revel in the presence of a person that has a cognitive disability and works hard to express themselves. I admire people with Autism who somehow tolerate over stimulating social environments yet endure so they can make a difference at a crowed Massachusetts State Courthouse. What we all share is the refusal to accept dominant social cultural norms that would isolate us into socially sanctioned and separate places to live and work. I refuse to accept tho as should all people disabled or not.
Posted by william Peace at 6:25 AM

I wish I knew you were coming to London. We could have had dinner or lunch or something like that.

Alex, Will let you know next time. It was a very short visit.