A week ago I started delving into the papers of Wade and Molly Blank housed at Denver public library. The papers are extensive, well preserved, and professionally organized (a rarity when it comes to disability history). I have long been fascinated with the Gang of 19. These men and women started a national movement. I never met a member of the Gang of 19. I never met Wade Blank or his wife. I deeply regret this. I was revolving in a different circle back then when ADAPT was being formed and Blank was helping young people with a disability escape nursing homes. I was paralyzed in 1978 and miserable when the Gang of 19 formed. I was angry like the Gang of 19. I hated how people treated me. In response, when I arrived at college I drank too much and smoked way too much pot. I had spent a decade in and out of various neurological wards and found myself paralyzed and medically stable for the first time in a decade. I was going to have fun and make up for all the time I lost in hospitals. In the haze of alcohol and pot I simmered and seethed. I knew at a guttural level the way I was treated was fundamentally wrong.  I wanted to embrace my people. I had no idea how to do this. I tried sports. I joined the wheelchair basketball team the Flying Dutchmen. I was a terrible basketball player. I had no idea how to play. It did not help that I weighed in at a whopping 100 pounds and was skinny as a rail. I had fun on the team but sports was not the way I wanted to connect with others. I needed a productive outlet and somehow became an EPVA bus buddy in NYC. It was on the streets of New York that I was able to vent my anger. 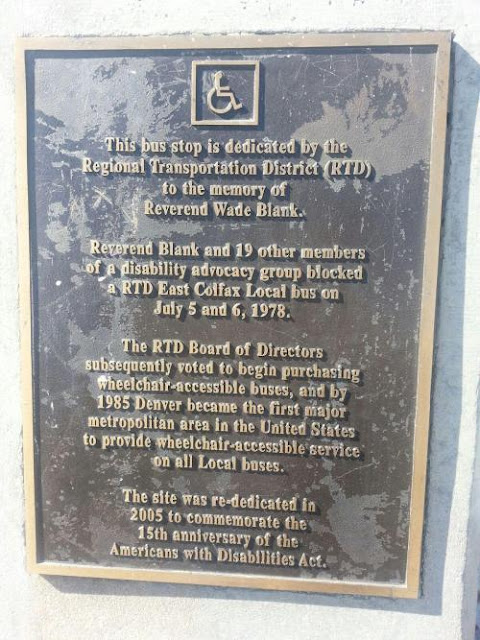 The first time i saw this plaque I laughed. The RTD fought tooth and nail against lifts on buses. This did not make the RTD unique. Every major bus line and mass transit system has viscously opposed wheelchair access. The fight to make mass transit accessible was nasty, mean spirited and in some cases violent. Acts of civil disobedience started in Denver and spread nationwide. Going through the Wade and Molly Blank papers I found clippings from newspapers across the nation. Wheelchair users chained their bodies and wheelchairs to bus fenders. Some got out of their wheelchairs and lay their bodies in front of inaccessible buses. I was a small part of this effort. I was an EPVA bus buddy. Because I was able to get on an MTA bus with a lift just once I was deemed an expert. I was tagged with teaching other people who used a wheelchair how to get on an accessible bus of which there were very few. My fellow New Yorkers were not impressed. They were in fact openly hostile. I was spit on. I was pissed on. I was screamed at. Bus drivers cursed me out. Entire buses full of people booed me and others who had the nerve to try and do the ordinary--get on a bus. We wheelchair users quickly developed a two person buddy system in NYC.  We would hide behind a car or bus stop. When the bus came to a halt one of us would pop off the curb and hold onto the front bumper. The other person would ask for the ramp to be deployed. If the driver started to back up the other wheelchair user would rush to the rear, pop off the curb and we effectively trapped the bus. As the months passed drivers adapted as did we. Some drivers would break the ramp in front of and give us the finger. Other drivers would not pull near the bus stop or curb. Most drivers would blow by us and not stop.

No single person became well-known for their effort to get on the bus. We cripples have no Rosa Parks. Our effort to access mass transit is largely unknown. Disability rights is not taught in secondary schools. Disability rights is not taught at most universities. The disability rights movement is a stealth human rights effort. Worse, the ADA is under attack and aside from we people with a  disability no one seems to care. Like many, I am deeply embarrassed by our current president and the GOP. There are days when I find myself filled with despair. Why does the GOP cater to the ignorant and those filled with hate? Nearly 60% of Americans believe our current president is a racist. Tens of millions of people are uninsured and our health care system is grossly dysfunctional. Falling down the rabbit hole of depression seems an inevitable and reasonable response. Yet I have resisted this impulse with remarkable success.

A few weeks ago I went to a public screening of a PBS documentary about the Gang of 19 at Atlantis. Atlantis is the second oldest Independent Living Center in the United States. For those unfamiliar with Independent Living, check out the Atlantis website. Link: http://atlantiscommunity.org To say I was energized the night I saw the documentary Colorado Experience: The Gang of 19--the ADA Movement would be an understatement. I got to meet John Holland who was featured in the film and is a brilliant lawyer who takes on small entities like the federal government! Meeting him and others that night was a thrill. I found my people. I also found a project. The Gang of 19 has not earned its rightful place in disability history. Without the Gang of 19, I would not be able to get on any mass transit bus in this nation. In delving into the archive it was readily apparent they inspired a nationwide movement of ordinary citizens who had enough. We people with a disability pay taxes and had the right to board the bus. We had a right to access mass transit. Without that right employment, housing, and education were not possible. I was like millions of other people with a disability who expected to live a long life--a typical life. That life included the simple ability to get on a bus. In the 1970s this was radical thinking.

When I was done working in the Denver Public Library last week I walked to Colfax and Broadway where the above plaque is located. It was not the first time i have visited this spot. Each time I look at the plaque I bring a disposable rag. I wipe the bird shit of the plaque. Sometimes I leave flowers at the base of the plaque. The men and women who formed the Gang of 19 paid a heavy price for their activism. To the best of my knowledge, 18 of the 19 members of the Gang of 19 have died--people like Larry Ruiz who was among those that escaped the infamous Heritage House at the age of 21 with the help of Wade Blank. This man should be a legend. I think of him regularly because on occasion I see a young non verbal quad getting on the RTD light rail. I suspect this person is a student at the University of Denver. What is striking to me is how ordinary it is for this person to get on the train. She has an iPad and types out her destination. The first time I saw this person I thought how awkward it would be for her to do the ordinary. And then the ordinary happened. The train driver did not bat an eye. He simply looked at her iPad and stated her destination. The person nodded and off we went. I immediately thought of Atlantis. Named after the lost community of Atlantis, I felt at home perhaps for the first time in my life. Don't get me wrong. Denver has its share of problems like any other city. Access fails abound. Indeed, a few days after I went to Atlantis I was invited to out for drinks at the View House--a local bar near my home. There was not a single table in the restaurant that was accessible and at no point did the host acknowledge my existence. I walked out in anger.

Life with a disability is wildly unpredictable. Within the span of a few days or even minutes one can be treated equally or horribly. I am forever grateful I fell into the field of anthropology when I was an undergraduate seeking a philosophy of life that would empower me to fight against ever present ableism. What I take great solace in is that I am just one of many people with a disability who refuse to buckle to lower expectations and outright bigotry that is socially sanctioned. I am part of the resistance--albeit a small part of a much larger wheel. The Gang of 19 was the wheel hub from which spokes of protests and civil disobedience spread. To know I played my part brings me more satisfaction than anything else I have done in my life.

Below is the documentary. It is well worth an hour of your time.

Like you, I took some time to realise I am part of a great family (I was injured in 1970 at the age of 31), and like you, I played a part in the disability rights movement - but in Australia.

An Aussie filmmaker, Sarah Barton, has made a great doco on the history of the movement in the USA, UK and Australia. It's called Defiant Lives - catch it if you can.

John, Your comment reminds me how diverse disability rights is. Countless people have made contributions. I have not heard of this documentary. Will look for it on line.

Oh tell me you are writing a screenplay for a bitching movie staring young actors with disabilities to play the gang of 19?!? Wouldn’t that be a wild and fun movie?