The Legend of Larry Ruiz

"My mind is completely intact".

These are the words of Larry Ruiz. He was interviewed via email by Fred Pelka and his words appear in Pelka's book What Have We Done. In my estimation Pelka's book is the richest and most detailed discussion of the ADA. It is not a book for the light hearted. This is a 622 page tomb for those intimately familiar with the creation and passage of the ADA. In Pelka's chapter about ADAPT he provides a few biographical portraits of key figures such as Ruiz,  Mark Johnson, Barbara Toomer, Babs Johnson, and Michael Auberger.

I lived there [Heritage House] on a huge wing with other children and adults for three years. Most of the people in the youth wing also grew up in institutions, and we did not realize that we were living in substandard conditions. We were treated poorly, and all our state benefits went straight to the nursing home. We were given an allowance of twenty-five dollars per month.
We had an activities director for youth named Wade Blank. He helped us form a residents council. Wade discovered that there were a lot things we could do for entertainment. We saw shows such as Elvis, the Who and the Grateful Dead. Our eyes were opened to the outside world., and we began to grow restless. Wade had the vision of us being able to live on our own. He helped us realize this possibility.

Ruiz escaped Heritage House and lived independently for over 35 years. He was a founding member of ADAPT, an organizer of Atlantis, member of the Gang of 19, and was arrested over 60 times at various actions. In the Denver Post obituary for Ruiz, Barry Rosenberg stated "Larry was a real icon, and I think he holds the world record for being arrested for his advocacy efforts on behalf of other people with disabilities". In the same obituary Julie Farrar stated that Ruiz fundamentally changed the way she perceived disability. She noted "the amazing thing about Larry is that he was always optimistic. There were times when I saw him struggle, but he didn't have a sense of resentment. He put all his energy into change, into achieving a higher social justice for everyone. It is amazing someone with his past, all those years in an institution, could use that for good".

I find it hard to imagine what Ruiz endured. He spent a lifetime telling others his mind was "completely intact". No doubt the assaults on his concept of self were relentless throughout his life. Escaping from a nursing home is a major accomplishment by itself but his contributions did not end there. Like many people with a disability who put their bodies on the line, civil disobedience is not only effective but creates an amazing sense of empowerment. This I get. Michael Auberger, co-founder of ADAPT along with Wade Blank and others, recalled APTA protests in Washington DC circa 1984.

One of the most empowering things that happened was to convince somebody that they could stop a bus. Here's a sixty-ton bus that all of a sudden doesn't move because somebody's sitting in front of it, somebody's sitting behind it so it couldn't back up. (That was another of the things we learned early on, that you can't just block the front of the bus, because they will back up). You can't talk about putting lifts on buses, and all the other things that came out of what we did, but I think the most amazing thing was the empowerment and self-esteem that people ended up taking home with them. To watch someone who had been institutionalized, is now out in the community but still struggling to survive, and accepting the handouts, to see somebody in that situation sitting in front of a bus and telling a police officer "No, I'm not moving. You had to tell people "Don't smile when you're saying these things, this is a serious issue", but all of a sudden you've got somebody who's feeling their oats, who's feeling like, "Wow, I just told a cop 'no, I'm not going to', and the bus is not moving, and it's not going anywhere because I can't ride it". As far as I am concerned that had more value than all the other things that we did and accomplished. People went from feeling powerless to being truly empowered. And those people were the people that went back home, talked about what they did, and organized around the issue, that felt like now they were somebody. You know, Jessie Jackson is always repeating the "I am somebody" chant. Well, it's one thing to say it, but it's a whole 'nother thing to feel it, and actually do it. 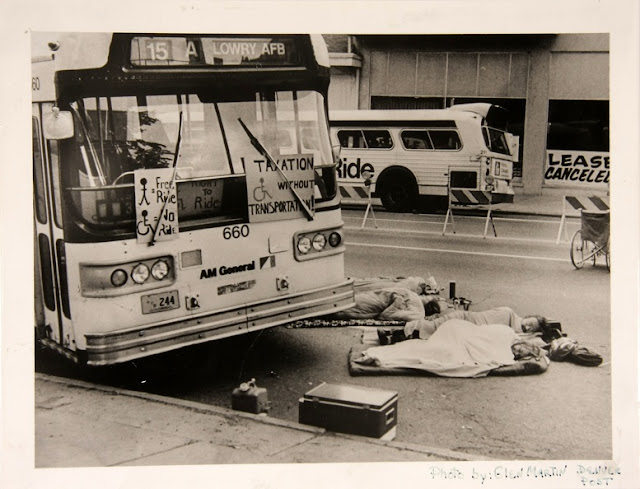 I love this quote and photograph above. Pictured are four people with a disability laying on the ground in sleeping bags in front of a Denver bus. Barricades and an empty wheelchair are in the background. I vividly recall that rush of empowerment long ago in Harlem as a graduate student at Columbia University when I stopped an MTA bus from moving along with a buddy. That is what people with a disability felt nationwide in the early 1980s when the fight to access mass transportation, especially buses, was dirty, nasty, and prolonged. I am sure that is the rush ADAPT members felt this past summer when they were arrested in the Capital building and elsewhere protesting health care cuts proposed by the GOP. This is why people with a  disability fight hard and do not compromise--think bare knuckles dirty. You see society does not expect us to get arrested, block buses, and chain ourselves to the entrance of buildings. There is the notion one should be kind to the handicapped. Well, if I have learned anything in my life it is that kindness kills. I don't want kindness, I want equality. That is what all people with a disability desire. Larry Ruiz knew this better than most. And yet this icon is largely unknown. Countless people who put their body on the line are equally unknown. This is unfathomable to me. It is also why I am forever proud I can seamlessly ride the bus in the city I now call home.
Posted by william Peace at 4:47 PM