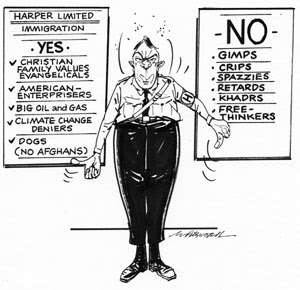 I love political cartoons and this one is outstanding. It appeared in The Coast, August 7, 2008, According to Bruce Wark it is easier to get a dog past the Canadian Boarder Services Agency than a disabled child.
Posted by william Peace at 9:49 AM No comments:

Last month a British family tried to move to Canada. Paul and Barbara-Anne Chapman, their two children, Jack and Lucy, as well as their dog, planned to move to Nova Scotia and open a business. Three years of careful planning was undermined on July 12 when they met with a Canadian Border Guard in Halifax. Apparently the Border Guard told the Chapman's they could not legally enter the country because their daughter was disabled. Lucy, 7 years old has Angelman Syndrome, a rare chromosome disorder. The Border Guard stated her daughter was banned from ever entering Canada under section 38 of the Federal Immigration Act. Despite concerted efforts to appeal this ban, the family was forced to return to Britain on July 30.

The above bare bone facts do not tell the whole story. For more than three years the Chapman's have been planning on permanently moving to Nova Scotia. They want to open up a business, hire about 25 people and in 2008 purchased a house in Fall River. The Chapmans are each former police officers and have run a small business in Britain but are drawn to Nova Scotia for many reasons. Clearly, they are ideal candidates to enter Canada--they are well educated, financially stable, hard working people. This is not good enough because they have a disabled daughter. They know this because they tried to enter Canada in 2005. They were explicitely denied entry because their daughter was disabled. Shortly after being denied entry the Supreme Court of Canada modified the disabilities section of the Immigration Act. The Chapman's reapplied to move Nova Scotia under the immigration nominee program. After two years and the support of six sponsors the Chapman's received approval from the provincial government to enter Canada.

Before the Chapmans arrived at Halifax they were under the impression that they had leaped through all the hurdles that were required to enter Canada. They never tried to sneak into country nor did they hide their daughters disability. They did all that was required by law and even got permission for the family dog to enter Canada. All went well until a Boarder Guard told the Chapmans their daughter was being "red flagged". The family was held in the immigration office for five hours and their passports were seized, all because the Boarder Guard deemed their daughter unworthy of entry. In the Chapman's estimation the actions of the Boarder Guards was nothing short of pure discrimination. It is hard to disagree with this assessment.

After reading multiple news accounts in Britain and Canada, it is clear to me the Chapmans are being discriminated against. Canada may welcome a host of different people but disabled people are not among them. This story is about one thing: human rights. Human rights denied to a family and one 7 year old disabled child in particular. I cannot help but conclude that in Canada disabled people are perceived as an onerous and costly burden. I know this because the Canadian Border has explicitly stated this on "Visiting Canada: Who is inadmissible?" According to this information card people whose conditions "might reasonably be expected to cause excessive demands on the health or social services" cannot enter the country. Disabled people are thus grouped in with terrorists, war criminals, convicted felons, those bankrupt, organized criminals etc. as unworthy.

Attracted by the a high standard of living in Canada and the recent drive to attract skilled workers, the Chapman's came face to face with ignorance and bigotry of not just one Boarder Guard but a government that deems disabled people as being less than fully human. There is no doubt Citizenship and Immigration Canada (CIC) is embarrassed. Amazingly, this story has failed to garner much press but what it has attracted is overwhelmingly negative. A CIC spokesperson has been quoted as stating "People with disabilities can come to Canada. In Canada we have rules and regulations to protect the Canadian people and we have to make sure that the proper process is followed. It is not that we do not want them (the Chapmans) here. They just have to follow the proper process which includes ensuring the residency permit is in place before arriving in Canada". I find this statement misleading at best for I have no doubt had their daughter not been disabled the Chapmans would be happily residing in their home in Fall river instead of being forced to return to Britain.

Is it too much to expect the Canadian Border Service to acknowledge they were wrong? In a word, yes. The fact remains everyone in the Chapman family was welcomed to enter Canada except their disabled daughter. Paul Chapman is all too well aware of this and has stated that if he "arrived back in Canada tomorrow and I am alone, or without my daughter, I would be allowed in. I can come and do business, I am allowed to create jobs for Canadians and to invest my money here in Canada's economy. But if I arrived again with Lucy, we would both be put on the very next plane back to the UK". This reality is hard to accept and is nothing more or less than a gross violation of human rights. This cannot be explained away as a paper work error nor is the story about one family and one disabled child. Disability rights are human rights--a fact that many do not acknowledge in Canada and elsewhere. Until that changes I will continue to rail against the sort of ignorance and bigotry that the Chapman family encountered. Their experience also highlights why I am proud to call myself a bad cripple for all bad cripples need to fight for one another or face social invisibility and isolation.
Posted by william Peace at 8:06 AM 4 comments:

I have not been home for much of the last month. Like many others, August seems to be the time of year when I get away from home. I spent some time in Vermont and was with out local Boy Scout troop at summer camp. The weather while I was away was wild. My son and I got poured and hailed on. When in Vermont flash flooding destroyed a bridge and several roads were badly damaged. Further complicating matters was end of the summer class lectures and a broken computer. Thankfully I own an Apple computer and not a single file was lost.

Two fascinating stories have developed or emerged in the last month. First, BBC America broadcast a show that examined Oscar Pistorius efforts to compete in the Olympics. I came away from this show with decidedly mixed feelings. Pistorius is clearly a gifted runner and his life revolves around a single minded effort to compete as an elite athlete. Yet he does not consider himself disabled and a part of me thinks he is very much like Christopher Reeve: a person who is wealthy and thinks he is morally superior to disabled people. Variables that cannot be ignored, ones that I will comment on in a later entry, is the fact Pistorius is South African, the show broadcast about him produced in Britain, and this blog archetypically American.

The second story I will comment about that a reader pointed out concerns the Paul and Barbara-Anne Chapman family. These parents of two children, one of whom is disabled, were refused residence in Canada. The reason they could not enter Canada appears simple: their daughter would be a "burden" on the Canadian health care system. I need to do further reading about this story before I make any comments. Yet it appears at this point that the Chapman's experience reinforces my concern that a national health care system is as flawed as the private system. Do not misconstrue this statement as support for the existing private health care system in the USA but rather acknowledgment that a nationalized system discriminates against disabled people in a different way.
Posted by william Peace at 5:02 AM No comments: