Use mass transportation. The fight to insure mass transportation systems were wheelchair accessible was long, arduous and heated. The opposition to putting wheelchair lifts on buses was fierce. Yet almost 30 years later I know young cripples are scarred. You were likely forced to take a short bus. That "special bus" was probably called the "retard bus" by your non crippled peers. I am sure you hated the bus. I am equally sure you were bullied. You are however the direct beneficiary of older cripples like me who forced our way into schools, onto buses, trains, and planes. In 1978 any person could object to my presence on an airplane. I was routinely denied boarding because I was a flight safety risk. Any passenger or airline personnel could object and I would be denied boarding. When lifts were first put on buses in New York City I was despised. People considered putting a wheelchair lift on buses a ridiculous waste of money. The idea the subway in every major city should be made wheelchair accessible was deemed preposterous. To this day, the New York City subway system is largely inaccessible. But the buses work well for we cripples in most cities.

I have been thinking a lot about mass transportation in recent weeks. I am an urban dweller. I use the bus system on a daily basis. Centro bus system in an impoverished city like Syracuse leaves much to be desired. The Centro bus website is abysmal. The Centro app has not been updated in years. Confusion abounds as does substandard service. This makes me sad. I am sad not for myself but the poor residents of a gritty city like Syracuse that need to get to work. Each day I am on the bus I pass building that are falling apart. I see many homeless men and women and various street people. I wonder what will they do when the weather turns cold. I am always the only wheelchair user on the bus. I don't like this. I am also struck by the fact the buses I ride are capable of holding 75 people and yet there are exactly two places to tie down a wheelchair. Clearly we cripples do not travel in groups of more than two. Were are loners, the isolated and unusual. The assumption is the presence of people using a wheelchair is a rare and exceptional event.

Get on the bus, please. On the bus are my people. Poor people. White people. Black people. Hispanic people. Many refugees. I hear different languages daily some of which I cannot identify. I see students on the bus too. I see a smattering of faculty members. I see health care workers. I see lots of manual laborers. What I do not see are my crippled brethren. Since July I have gotten on many buses. Not once have I observed another wheelchair user on the bus or waiting at a bus stop. I know my fellow cripples exist. Where are you? Where are the wheelchair users accessing mass transportation? I do not see wheelchair users on the train either. I occasionally pass a person using a wheelchair in an airport but that is a rare event. This is a big problem. The lack of representation, the lack of visibility empowers ableists to question the utility of the ramps on buses and trains. Believe me, ableists abound. They don't want us on buses, trains, and planes.

I get it the resistance. Bus drivers, train employees and especially airline personnel treat wheelchair users and a host of people with a disability as poorly as humanly possible. In the last month only one Centro bus driver has truly tied down my wheelchair in a way that I felt safe. The tie downs are applied but it is more show than anything else. If I am on a bus that is in an accident I am going to be seriously injured. I know buses are slow, run late and waiting is not pleasant. And yet I love taking the bus. I love mass transportation. I am with the huddled masses of humanity. I have not been cleved off from the heard. I am part of the society. Society can be an unpleasant place. The bus can be downright unpleasant. Last week the air conditioning on the bus I used was broken. It was well into the 90s. It was a hot stinky ride. I was happy. I was not cut off from others.

Please go out of your way and read To Ride the Buses edited by Mary Johnson and Barrett Shaw. Read the Ragged Edge edited by Barrett Shaw. It is a collection of the first 15 years of the Ragged Edge--in my estimation the most important rabble rousing collection of disability rights writing. Oh, how I miss the Ragged Edge. If you visit Denver go put some flowers on the marker dedicated to the Gang of 19 at Colfax and Broadway. Those men and women paid a heavy price to insure wheelchair users could get on the bus, go to work, shop, and be a visible part of society.

Go ahead and upset people. Don't be afraid to be confrontational. Be polite too. Do whatever works for you but be present. Assert your rights. If you don't we will all suffer. If we are not present ableists will do what ableists are good at--undermining disability rights. I know as winter sets in I am going to be in a battle with the city of Syracuse. I need to get to the bus stop. Snow removal is substandard. Curb cuts will likely be inundated with snow and ice. Bus stops will be blocked by cars and snow piles. I will be out there rain or shine. Where will my fellow cripples be? I hope to see you. I am lonely. 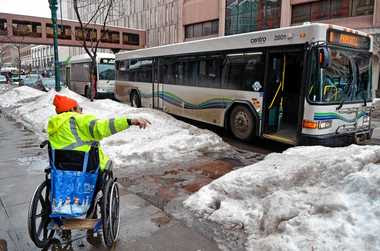 Today at Tales From the Crip Ingrid Tischer wrote the following:

What would be a “threat of self-harm” for you, is a “personal choice” for me.

What calls for an intervention for you, calls for a pre-suicide party for me.

Tischer wrote these words for World Suicide Prevention Day. I urge others to follow the provided link and read her words. They are powerful. Like me, Fischer was a first. Our generation was the first that expected to live and lead an ordinary life. An ordinary life that included paralysis. While her words struck it was one image that really prompted a flood of memories. 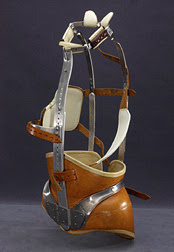 I wore that brace for many years. I wore it 23 hours a day. I was allowed a 15 minute daily shower and the remaining 45 minutes was spent vigorously exercising my trunk muscles. I hated that brace. It was hot. It was heavy. Despite the fact I could walk, it made me a target. I wore that brace for five years. In the summer I perspired so heavily that I would wring out my shirt. In the winter the metal would get cold and no jacket in the world could keep me warm. I suffered. The worst was monthly brace clinic. The orthopedic surgeon I saw was a cold miserable man. I hated him. He had no heart. Brace clinic was pure pressure. If my scoliosis got worse I would need immediate surgery. That fear hung over my head for years. However, thanks to brilliant parenting my mother built in a pressure relief valve. After brace clinic we would go to the Cloisters in northern Manhattan. We would get a dirty water hot dog outside the hospital and then get in the car heading north. We walked around the Cloisters looking at the tapestries and from the parking lot admire the view of Hudson River and cliffs on the New Jersey side of the river. I remember the stress. I remember the bullying. I remember teachers laughing along with other students when I would be mocked by others.  Why I am telling this story? Today I looked in the jacket pocket of an old jacket. I found a note written by mother. It was simple: "Happy Christmas! Love Mom and Dad". I burst into tears. I mourn my mother and father. As I tell others, I hit the parent lottery. Thankfully, I was with a friend who held me as I cried.