On July 17 I took the NYT to task. I was severely critical of an article by Robin Marantz Henig "A Real Life-or-Death Situation".  I received a lot of email about my post.  Some felt I was not fair to the Brooke Hopkins and his wife Peggy Battin. This was not my intent. My critique was aimed at the New York Times in general and the the way the article in question framed by Henig. I was not critiquing Hopkins or Battin and the way they coped with SCI. The disabled body, Brooke Hopkins body and by extension disabled bodies, as depicted by Henig was demeaning in the extreme. I fired off a blistering email to Henig and to her credit she replied and apologized for the way the body was described in her article. I accepted her apology.  I do not think she did this on purpose. As the comments following my post noted, many people missed the demeaning description of the disabled body.

A few days ago I received an email from Joh Kelly, a fellow Not Dead Yet board member and director of Second Thoughts.  Kelly is a sharp guy and spear headed the opposition to assisted suicide legislation in MA.  He took creative liberties with Henig's NYT article and wrote the following poem.  Thanks go to John for letting me post this.


A Diaper and Green Crocs: A Right to Die Case Study
Words by Robin Marantz Henig, Arranged by John Kelly

Ensnared in the life-sustaining machinery he hoped to avoid –
a plugged-in mannequin in the I.C.U.
Physically ravaged,
a quadriplegic, paralyzed from the shoulders down.

Such a constrained and difficult life –
dependence, indignity and sheer physical travail.
Spasms, pain, catheterizations, bouts of pneumonia, infected abscesses in his groin,
no mind can fly free of a useless body’s incessant neediness.

Each body harbors its own form of decay –
Inert sack of a body, impassive as Buddha


Each body harbors its own form of decay –
Inert sack of a body, impassive as Buddha
Pervasive dependency –
a diaper and green Crocs.

An aged couple planning a tandem suicide to make way for the younger generation.
Kill the dogs in a  psych experiment,
“euthanasia.”
death with dignity.

The local New York tabloid the Post us at it again. Yes, Tara Palmeri, the “journalist” who broke the Disney World story about rich Manhattan residents hiring people with a disability so their kids would not have to wait on line, has another disability related exclusive.  Today Palmeri has written “New Yorkers Use Bogus Therapy Dog Tags to Take Fido Everywhere”.  Link: http://www.nypost.com/p/news/local/stupid_dog_trick_1nMC3NBq6sPfyzlpXdiDkN
According to Palmeri, Manhattan residents are purchasing fake therapy dog vests so one can bring their small dogs into stores and restaurants.  I take anything I read in the Post with a huge grain of salt. The Post generates playful headlines and I do my best to restrict my reading to the sports section. Today I failed. The giant banner, Exclusive, was just too enticing.  As Rupert Murdoch knows yellow journalism and eye catching headlines sells newspapers. Check out this picture published by the Post. 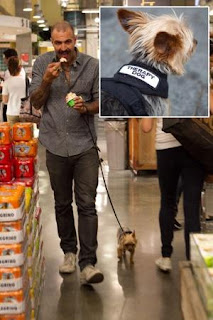 story, like many Post exclusives, is misleading and filled with half-truths.  According to Palmeri, “To obtain a legitimate [sympathy] tag, an applicant only needs to present a letter from a dog trainer saying the dog can perform certain useful tasks. Proof of a disability isn’t required.” This statement is false. At best one could label it as grossly misleading.  I am by no means an expert on the difference between service dogs, therapy dogs, and guide dogs. However, I have been around  service dogs and guide dogs. These are amazingly well trained animals. Their behavior, near perfect, sticks out like a sore thumb. I also know this requires great dedication on the part of many organizations throughout the nation that seek to empower people with a disability.  In my estimation service dogs and guide dogs are fundamentally different animals and share a unique bond with their owners. These dogs are not pets. These dogs can and do make a rich and full life for people with a disability possible.

I did a basic google search about therapy dogs. I will concede the laws pertaining to therapy dogs are confusing. Emotional Support Animals also known as therapy dogs “are not the same as Service Dogs (SDs). ESAs are Therapeutic Pets, usually prescribed by a therapist or psychiatrist or doctor, that help the disabled with emotional difficulties or with loneliness. They may include cats and birds. Under the US Federal Laws, Emotional Support Animals (ESAs) cannot go into no-pets-allowed places, BUT THEY ARE ALLOWED to live in “no-pet” housing and in the cabins of airplanes when accompanied by a note from their handler’s doctor.

The above quote was not hard to find. Multiple websites discuss in great detail what a service animal is. For example, Pet Partners states:

Service Animals are legally defined (Americans With Disabilities Act, 1990) and are trained to meet the disability-related needs of their handlers who have disabilities. Federal laws protect the rights of individuals with disabilities to be accompanied by their service animals in public places. Service animals are not considered 'pets'.
Therapy Animals are not legally defined by federal law, but some states have laws defining therapy animals. They provide people with contact to animals, but are not limited to working with people who have disabilities. They are usually the personal pets of their handlers, and work with their handlers to provide services to others. Federal laws have no provisions for people to be accompanied by therapy animals in places of public accommodation that have "no pets" policies. Therapy animals usually are not service animals.

I cannot help but conclude Palmeri and the editors of the NY Post were far more interested in a catchy headline than a news story based on factual information. I can over look this—we are talking about the Post afterall. But I cringed when I read one man state “Sometimes, they’ll give me a hassle and say bring the papers next time, but for five bucks, you order [a patch] off eBay, and it works 90 percent of the time.” This sort of narcissism bothers me because it is all too common for blind people with a guide dog to encounter bias. Being refused service in a restaurant or store is a routine civil rights violation many people who are blind have experienced.  What Palmeri and the man quoted are counting on is an ignorant populace.  This has a direct impact on the lives of real people who use a service dog or guide dog.  Imagine you are blind and you and a guide dog team, human and animal, try and enter a restaurant with friends.  Instead of being welcomed you are asked for “papers” proving your dog is a legitimate guide dog.  According to the latest from the US Department of Justice Civil Rights Division Disability Rights Section “ When it is not obvious what service an animal provides, only limited inquiries are allowed. Staff may ask two questions: (1) is the dog a service animal required because of a disability, and (2) what work or task has the dog been trained to perform. Staff cannot ask about the person’s disability, require medical documentation, require a special identification card or training documentation for the dog, or ask that the dog demonstrate its ability to perform the work or task.”

Again the quote form the US Department of Justice was not hard not find. Palmeri could have found this easily. Palmeri had no interest in writing an accurate or fair story about therapy dogs. Her story was not really about those individuals that scam the ADA so they can bring their pets with them. Her exclusive article was based on a larger cultural phenomenon: the unarticulated animosity directed at people with a disability. In this case it was about people with a service dog. In her previous article about Disney World it was about those that use wheelchairs. What Palmeri is attacking is the idea that the ADA provides “special” accommodations for people with a disability.  Special in this context is akin to unfair perks. Think handicapped parking. Palmeri relied upon the fact few equate disability rights with civil rights. She framed her article so the ADA, civil rights legislation enforced by the US Department of Justice, was perceived to be an unfair advantage used by people with a disability. Palmeri tapped into the cultural ideal that all Americans are equal.  This is something I would hope all Americans aspire to see but know it is an ideal that is illusive.  And sadly today I feel very much alone in my efforts for inclusion—especially after mistakenly reading the NY Post. I hope in the future Palmeri sticks to page six gossip columns.
Posted by william Peace at 11:44 AM 11 comments: