A Deer Hunter is Dead: Humanity and Life Needlessly Ended

I am disgusted. Ashamed really of American society. Timothy Bowers is dead. Few will recognize the name even though his death has gone viral. The mainstream press refers to him as “a deer hunter”. His death is a tragedy.  I can see in three or four years a made for TV movie—a real tear jerker. Average man, on an average day, with a newlywed wife and baby on the way goes out to hunt. He has done this many times. He is an avid outdoors man. But tragedy strikes. He falls 16 feet and crushes his C-3/4 vertebra. Imaging suggests he will most likely be a vent dependent quad. Not to worry though, he will be heroic. He will die. And he does indeed seemingly choose to die. The story is full of emotion and short of logic. In fact the story I have just told is utter bull shit.

Bowers needlessly died. In fact when I first read the story my first thought was this man was murdered. Legally killed by his family and physicians. Bioethicists are providing the post mortem cheer squad. Patients rights reign supreme. This is what happens when health care is a commodity. This is what happens when people see a paralyzed person and the first thought is about the expense of keeping such a person alive. So the heart broken physician enters the picture with long white coat flowing and perhaps blue scrubs, the very representation of human compassion, and paints a grim picture of a sudden spinal cord injury. The man is heavily sedated. Imaging depicts a devastating wound at C-3/4. He will likely be a respirator dependent quad. Tears flow. A grim reality is explained—medical costs will be staggering. Life in an institution is a reality. Bankruptcy a real possibility. Framed in this manner death seems preferable. But wait!  We must be ethical. We cannot just end this man’s life—he wife is pregnant for goodness sake. Sedation is lessened and the man is told the gravity of his situation. He wants to die. His family wants him to die. His wife recalls they were at a charity event helping paralyzed people and he was clear life using a wheelchair was not what he wanted. The respirator is turned off. The man dies.

What is missing? Stephen Hawking. Jean Dominique Bauby. Stephen Gleason. More than one board member of the grass roots group Not Dead Yet. The very real and significant possibilities of life as a vent dependent quad are never mentioned. No effort is made to contact anyone with a comparable disability. This is a one sided rush to a death. This man was not given a legitimate choice. Worse yet, this man’s autonomy is praised by those in bioethics. We were ethical. No, you were not. Bioethicists support the easy, simple idea death is preferable to life with a disability. I get it. I have been in a bed when under different circumstances I got similar advice from so called compassionate care giver. Let me tell you it is easy to die when you are paralyzed. When one expresses such sentiments a veritable cheering squad supports you. The opposite side of this reality, the decision to live as paralyzed man is frowned upon. The worse the paralysis the more narcissistic you are thought to be. A selfish and costly existence, a social burden, the representation of the limits of medical science. I suggest bioethicists, hell any bipedal person, talk to a few paralyzed people. This will not happen because somewhere along the line dissent became unpatriotic.  Advocacy in the realm of bioethics and politics is a dirty word.

Why the hell am I as a paralyzed man involved with bioethicists.  Most of the utilitarian philosophers want me and those like me dead. If I sound off base I suggest you google dear hunter paralyzed. Thousands of comments are easily accessible--in choosing death Bowers was a hero. In choosing life I am disparaged, disliked, and seen as an economic drain. My existence is deeply stigmatized. Dying is easy it is the living that is a bitch.

Some People Just accept it. I Don't

Another paralyzed bride story has been published. This time the Denver Post has printed a story replete with an eight minute video and a number of photographs about a very attractive young woman who wants to walk down the aisle at her sisters wedding. Hard to imagine the Denver Post story is much worse than the previous paralyzed bride story I wrote about. How bad is the story? Let me quote the first sentence: For someone who was told she would never walk again, Mackenzie Gorden spends a lot of time thinking about shoes". The below photograph highlights this point. 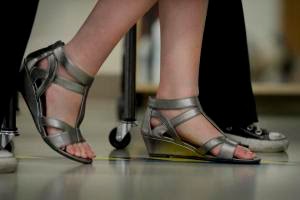 The story in the Denver Post glorifies walking. Using a wheelchair is deeply stigmatized. Do not trust me--read for yourself; here is the link: http://www.denverpost.com/paralysis/ci_24406689/stepping-toward-hope-paralyzed-bridesmaid-defies-disability Lines such as the following are inherently demeaning.

"Patients are standing up and taking steps after years of sedentary life. Quadriplegics lean only on walkers to shuffle hundreds of feet".

"Golden retains the rail-thin figure of the dancer and cheerleader she was. But a girl can have many goals".

"Golden was 18 and looking forward to senior year. She had danced and cheered all over the state and was to captain her team on a summer trip to cheer in Hawaii. She was a nursing assistant and wanted to pursue a nursing degree. Shattered C5 and C6 vertebrae now clamped down on those dreams".

Goodness where do I start? "A girl can have many goals". This sentence could have been included in  a 1955 etiquette book for girls. You know a girl is supposed to support her husband, have children, and be a good homemaker. Paralyzed people are sedentary, quadriplegics shuffle their feet, Gorden retains here rail thin figure and a spinal cord injury clamps down on her dreams. This is not just bad. This is epically bad. The hook, of course, is tragedy. The heroine is the beautiful but crippled woman who refuses to accept the fact she will never walk again. Left unsaid is the fact she is a superior human being when compared to other paralyzed people that are lazy failures. The exploitation involved is extreme. The story is gender biased in the extreme. Does the fact Gorden can brush her own hair and put on make up seem worthy of noting? I think not.  Sex sells I suppose as the story also has a photograph of Gorden in a pool wearing what else but a bikini. 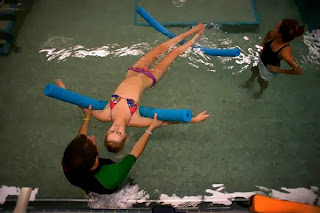 The framing of this story is dreadful. Worse yet, is that Gorden is at Craig Hospital in Denver. This is one of the leading institutions in rehabilitation for people with a spinal cord injury. I wonder about the reaction of health care professionals who work at Craig. Are they delighted by the story? Are they appalled like I am? To me, this story is a missed opportunity. There a few nuggets of great interest that reveal how far the treatment of spinal cord injury has advanced. Gorden obviously has an incomplete injury. In the olden days when I was paralyzed the American Spinal Injury Association had not as yet established the ASIA scale. Two sorts of injury existed circa 1978. Complete and incomplete. Those that fit into the incomplete category were exceedingly rare. Today,  spinal cord injury is broken into five categories and there really is a range of function thanks to advances in immediate post injury care.  None of this fits into the Denver Post story. The focus is on walking and walking alone. Reality however is different.  Apparently Craig Hospital has embraced locomotor based therapy.  The goal is not walking but rather mundane and serious issues associated with spinal cord injury: circulation in the limbs, bone density, pressure sores, muscle atrophy, obesity, and bowel and bladder function. None of this is sexy. This sort of discussion will not sell newspapers. Into this void we get yet another story of a paralyzed woman that wants to walk.

Most disturbing to me to me is Gorden's seeming dismissal of good advice from her paralyzed peers. They told to her move on with life, to focus on ordinary things like going to college. This advice is dismissed. Gordon is quoted as stating it is easy for them to say because they don't have a chance to walk again. This individualizes her disability and isolates Gordon from others. She also confesses to being annoyed with this attitude. I suspect she also feels in some way morally superior to her paralyzed brethren. Perhaps in time Gorden will have a more nuanced view of disability and spinal cord injury. Perhaps she will discover the real issue for a person that is suddenly paralyzed is far less physical than it is social. Despite great progress the physical environment is not designed with wheelchair users in mind. It is my hope Gorden will realize that life is sweet regardless of whether one uses a wheelchair or is bipedal. It is my hope she will learn that images of her mother lifting her and putting her in the passenger seat leave much to be desired. 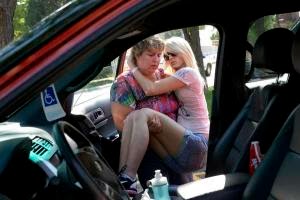 I see this image and cringe. Craig Hospital has an exoskeleton and other high end medical devices of dubious medical benefit and Gorden is lifted in and out the car by her mother. This makes absolutely no sense. Why does she not independently drive a car or mini van equipped with a lift and hand controls? If I were a college aged person being lifted in and out the car by my mother would be the last thing in the world I would want to happen. Screw walking, I want to be independent. I am happy to give Gorden much slack. She has been injured less than two years. My problem is symbolic.  What message is being sent when it appears the entire point of rehabilitation is an effort to walk? What message is sent when time is spent walking in an exoskeleton and Gorden's mother wishes she had such a device at home? Again, this makes no sense to me. I would think with an incomplete injury the effort to retain or regain as much movement as possible is a critical goal.  But it appears to me the only goal is walking. I for one would like to know more about Gorden's plan for attending college. She wants to be a nurse and when she met a paralyzed physician she thought if he can get through medical school I can get through nursing school. Rather than focus on such typical goals.  I would like to also know how exactly she ended up at Craig Hospital? Was she selected because her injury was incomplete? If so, how does her care differ from a person with a complete injury? Are people with no chance to walk again deemed unworthy of rehabilitation? Are such people perceived to be failures? To me these sort of questions emphasize how little the readers of the Denver Post will get out of the story about Gorden. A waste of newspaper space if you ask me. A destructive waste of space as well.
Posted by william Peace at 8:41 AM 9 comments: