An Addendum: Ignorance and Presumption of Incompetence

In my last post I wrote about being harassed by inner city youth. Such harassment is not restricted to the young. I suspect the young men that harassed me saw an easy mark. This makes them like most people who see disability as a problem. For most typical others, all they see is a wheelchair. I am wheelchair man and thanks to the new blue wheelchair logo I am wheelchair action man. However the new logo has not changed the assumption that  life using a wheelchair is inherently less and sub-standard. I am now and forever in dire need of help. The fact I do not need help doing the ordinary never crosses people's minds. Like it or not, social boundaries are absent and I am routinely disrespected.

In the land of disability, prejudice, stigma, and ignorance play out in a myriad of ways. Yesterday, I had a somewhat bizarre encounter. Last week a dear and deeply valued friend hurt her back. After a sleepless night she went to the hospital. Hospitalized for less than a week she was transferred to a local short term rehabilitation hospital. I have visited almost daily and have provided many meals. This is what you do for good friends as the food served at the facility is inedible. Yesterday I visited in the late afternoon. After a short visit I left and that's when things got strange. I left the facility and due to a lack of curb cuts was in the street going uphill to my car.  I transferred into my car when I was suddenly accosted by two official looking men. The following exchange took place:

Men: "Sir, where are you going? You can't leave the facility"

Me: I have a puzzled look on my face

Men: "We lose people here. The patients get out and wander away. We are worried about your safety. Can I see your license and registration? Can you prove you are not a patient?"

Me: "I am not a patient. You are not the police and have no right to ask for my license or registration".

The look on my face was clear. The interrogation was over. The ignorance displayed here boggles the mind. Of course, every person who uses a wheelchair is a patient. People who use a wheelchair are not independent. The ordinary is impossible. Obviously wheelchair users do not visit patients--they are the patient. I am still shaking my head in wonder. How many patients use a fire engine red manual wheelchair? How many patients will break down a manual wheelchair and put it in the back of an Audi? The answer is none. Yet, I was in essence wheelchair man. All wheelchair men are the same. All wheelchairs are the same. In the facility I visited every wheelchair is cheap, black, and wide enough to fit an extremely wide person. If these wheelchairs went outside they would fall apart in short order. My wheelchair is custom made and has a rigid frame. The difference between the facility wheelchairs and mine is vast. The difference is stark--as in a Ferrari versus an old Ford. I wish I could say I am surprised but I am not. This is not the first time I have been asked if I am the patient. The assumption made is basic--I am not an independent or contributing member of society. This is the personification of the medical model of disability. This is as distressing as it is disappointing. What the hell are health care workers being taught?
Posted by william Peace at 1:06 PM 11 comments: 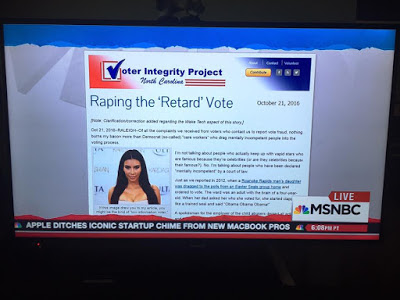 We are in unchartered waters. Instead of assuming competence as Doug Biklen championed it seems we now presume incompetence. The street youths that harassed me do not exist in a social vacuum. Popular culture impacts all members of society and Trump has tapped into a well of anger and hatred. His mocking of a disabled reporter has unleashed ableist bigots who typically hide behind a veneer of Do Gooderism. Flat out hostility has replaced Do Gooderism. I am deeply worried about this. A war is taking place on people with a disability in the United Kingdom via worker assessments performed by ATOS. Will the same sort of war on disabled people take place here? It is possible if not likely. Think about it this way: what if I called the Syracuse police and reported a hate crime. I am without question a member of a distinct and insular minority group. Being called a "fucking retard" is without question hate speech.  Would the Syracuse police have responded? I think not.  I also think most people without a disability would scoff at the notion. And that my friends keeps me up at night.
Posted by william Peace at 9:41 AM No comments: