Abuse of People with a Disability: Those that Dare to be Assertive

I  have not posted much this month. I have had a hectic schedule and this week students have emerged worried and stressed out. Time is a commodity that is in short supply for me and many others who work in academia.  The end of the academic year also puts me in a retrospective mood. The academic year at Syracuse has been wonderful--tremendously rewarding--and without question one of the best academic experiences I have ever had. In fact if were not for debilitating personal angst last Fall I would characterize my year at Syracuse as the best experience I ever had. The symposium I organized, Lives Worth Living, was rewarding in the extreme. And when I use the word I here it is grossly misleading. The spectacular staff of the Syracuse Honors program did all the heavy lifting in terms of labor and organizing. The event could not have taken place without their professionalism and dedication to insuring the day went well. I owe each and every staff person a debt of gratitude.  It was not just this event--the honors staff helped consistently and always with a smile. They have been a continual source of assistance; an amazing group of people.

While I am always retrospective at the end of the academic year two major life events have heightened my feelings: First, after nearly two decades in the same home I will be moving this summer. Second, my son is graduating from Hofstra University. We are a family in transition my son and I. He is about to embark on his adult life. Such an exciting and stressful time for him. I am very proud of him and I often shake my head in wonder--I spawned an adult. He will find his way and like all others have his share of ups and downs. As for me, my travel schedule will be significantly reduced this summer. I have two more events of significance. Since last August I have not been home for more than eight consecutive days. I am physically and mentally tired. I am focused on finding a new place to live. My overwhelming desire is to be a rolling stone for an unspecified time period. I will not tie myself down. I want to remain a man on the move.

As I think and worry about moving I have spent much time thinking about my life in the New York City area. This morning I saw an image that instantly transformed me back to the early 1980s. I was young. I was cocky. I was in graduate school and ambitious. Oh what an obnoxious cock sure person I was. I knew all the answers to life and was not afraid to share my depth of knowledge! Ugh, embarrassing to look back now as an adult. What I am not embarrassed about was my activity in the fight to insure NYC buses had wheelchair lifts. The Mayor of New York was fiercely opposed to putting wheelchair lifts on buses--as were most mayors of major cities. The para transit system politicians yelled worked just fine. Yes they worked just fine for people who were devalued and dependent upon inferior service that had to be planned days in advance. This made me angry and I forced myself on the bus one day. Within a few weeks I suddenly became a bus buddy. I volunteered for what was then the EPVA.  I am not a veteran but they organized events and found people willing to help others get on the bus. I was quickly deemed an expert because I successfully got on a bus--likely once or twice. The opposition to wheelchair lifts on MTA buses was extreme.  I recall the only sure way to get on the bus was to hide near the bus stop with another person using a wheelchair. Once the bus stopped one of us would pop off the curb and grab the front bumper of the bus. With no where to go the bus driver had no choice but to lower the bus lift. This promoted a chorus of boos from passengers--on a good day. On a bad day I would be screamed at and on very bad days I was spit on.  So when I saw the below image I was not at all surprised. 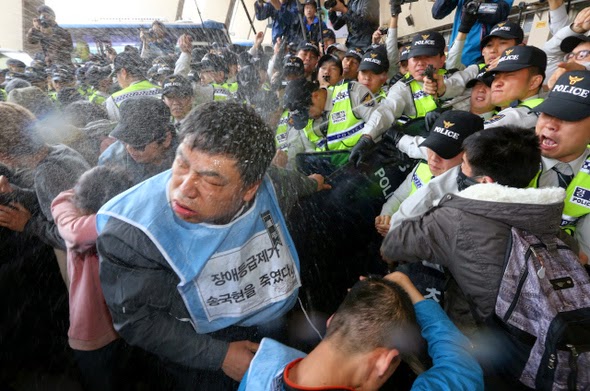 The image depicts member of the National Solidarity for Ending Discrimination Against the Disabled being sprayed with tear gas by the police at a bus terminal in Seoul South Korea. The people in question were gassed on South Korea's Day of the Disabled. I love the irony. The activists were like me in the 1980s. They were trying to something very ordinary--get on a bus. I was never tear gassed but I was certainly verbally abused. And yes as already stated I was spit on. I had beer dumped on my head and once had an egg thrown at me. I heard passengers chant "go, go, go" encouraging the bus driver not to stop for me. I saw bus drivers purposely break the lift key in the off position so they could not use the lift. More than one driver did this with nasty smile on their face. Many drivers lied and said the lift was broken.  I cannot  recall a single bipedal person offering words of support. Not one. I was hard. I wrote down bus numbers and called in complaints daily.  I even go friends to call in as well. I was a man on mission and better yet was not alone.

Times have changed. New York City bus drivers do not bat an eye when I get on a bus. My fellow passengers do not look up. The lifts on virtually all buses work perfectly fine. Bias is rare. Is this proof I now live in a city akin to Criptopia? In a word no. I am looking for a place to live. I called a dozen apartment buildings over the last few weeks and quickly learned the stock answer to my question about a wheelchair accessible unit is no. None are available, the waiting list is 3 to 5 years and they are not taking any more names to add to the list. The message is not subtle--my crippled ass is not welcome.  Essentially 99% of the apartments are not accessible. It is these basic forms of exclusion that are deeply problematic and can and do ruin lives. By basic I refer to accessible housing and accessible mass transportation. This remains a formidable challenge in my life and the lives of others that use a wheelchair to navigate the world. Yes, I can get on a NYC bus and many other buses in major urban cities across the nation. But the vast majority of homes and buildings remain grossly inaccessible. So as I prepare to move I  am reminded my existence is still not valued.
Posted by william Peace at 6:42 AM 5 comments: