Culture is Inscribed on the Body

When I teach my class body art and modification I repeatedly use one line: culture is inscribed on the body. I also use the simplistic but effective analogy to an American traveling abroad. When one travels abroad it is easy to pick out an American. We as a group tend be loud. We tend to be fat. We tend to think every human being on the planet speaks English. We expect to be served. Of course theses are broad generalizations. The point I am trying to get at is that for some of us culture is indeed inscribed on our body. My body is scarred. I have train tracks running up and down my back from my neck to the crack of my ass. I have a scar on the back of my hip. I have large ugly scar on the front part of my hip.  My left hip is dislocated and as result my left leg is short than my right leg. I have a severe sclerosis. I have a cracked tooth and need dental work. Let's put it this way: there is not one symmetrical part of my body. I am scarred and distorted from head to toe.

Survivors have scars. I have scars. I have a body that tells a story. It is a story of survival. I took the best and worst that modern medical care can dish out. Add in a healthy dose of aging and I am battle worn.  I look at my body and cannot help but state to a degree it  is wrecked. This does not bother me one iota. I plan to do further damage. I want my body to continue to be used and to a small degree abused. I want to get everything out of my body. When I am old I want to slide into death knowing I got every last drop of energy out of my body. I want to use my brain to the best of its ability and foster social change for all people with disability. Damn the torpedoes full speed ahead.  Live life to the fullest. Go ahead take chances. Take leaps of faith. We only get one shot at this wonderful thing called life.
Posted by william Peace at 4:54 PM No comments:

As I have been packing up box after box I have been thinking about a disturbing video created and widely disseminated by the pro assisted suicide group Compassion and Choices. Frankly I found the video shocking. It is a perfect representation of why I find the debate concerning assisted suicide so frustrating. For many years I have sought to find common ground between those who oppose and those that support assisted suicide legislation. I think my quest for common ground is hopeless because two well worn stereotype exist. First, there are people such as myself. I am a self righteous crippled bastard with a chip on my shoulder who denounces and attacks others who want to control the circumstances surrounding the end of their life. In particular, I want other cripples to suffer just like me and go out of my way to attack others who simply want a good death they can control. The second are the reasonable scholars and average citizens who merely want to control the end of their life. These people want to eliminate suffering for the terminally ill. Such advocates wear buttons that state "My Life, My Death, My Choice".  The idea that ending one's life is a tight and sacrosanct.

I want a nuanced debate about the end of life. I want to witness a national debate that addresses how we approach the end of life. No one wants a human being to die alone and in pain. Sadly, this happens all too often. In the ABC-CLIO Companion to the Disability Rights Movement Fred Pelka wrote disability rights advocates "insist that decisions about suicide, just like decisions about aborting  a disabled fetus, should not be made based on stereotypes about the quality of life with a disability. Rather than fight for their right to die, they instead prefer to fight for their right to live with dignity and independence".  This is exactly why I am upset about the Compassion and Choices video.  They are utterly reliant on a disability archetype: disability is bad. People with a disability live a diminished life. People with a  disability are suffering. People are dying in pain because of unbalanced bitter cripples like me. The result of this faulty line of reasoning is the below Compassion and Choices three and half minute "celebration" of the ADA.

Sara Myers and Dustin Hankinson are new. The names change but not the methods utilized by Compassion and Choices. How others fail to get this is a mystery to me. When I see a person with a disability or an elderly person with significant physical or cognitive deficits I think they are hard asses. Those people have a strong will. Life was likely not easy but they endured and I hope thrived.  I imagine what their life is like. How did they adapt and what can they do? I only consider what people are they capable of doing and dismiss what cannot be done.

To end, as I move around my home I have found myself thinking about the buttons worn by assisted suicide advocates are ironic: "My Life, My Death, My Choice".  My, my, my in triplicate. The word narcissistic springs to mind. Could it be people are that selfish? Could people desire autonomy and control that much? "Mine Mine Mine", the childhood refrain, has been repackaged by adults who are afraid of disability and death. I hope I am wrong for I believe all human beings lives have value. All people have the right to live. That includes a baby taking his or her first breath to the elderly person taking their last breath. Death is not a right it is physical inevitability. It is life that holds meaning.
Posted by william Peace at 12:48 PM 5 comments:

July has been a hectic month. I am moving. I do not like to move.  This move has been a long time coming. In fact my life has been a roller coaster the last few years. High highs and the lowest of the lows. My house, a 1959 prefab, was a great place to raise my son. I have many fond memories but it is time to move on. I intend to be a rolling stone for quite some time. I am weary of being a home owner. I do not understand the over attachment to a place and certainly a home. It is not where one live but how one leads life that matters. Home ownership is misleading--a capitalistic myth. One owns a home but what a person really does is manage a building. Well my building is a pain in the ass. In recent weeks my house was hit by lightening and blew out kitchen appliances and electronics that were not unplugged. Just a few days ago the main pipe from the well to my basement burst. At least a foot of water was in my basement and when I opened the door was met with a small tidal wave of water. The plumber noted "you have a great well pump. It will pump about 20 gallons a minute." Sorry I am not impressed. What does impress me are memories. I cherished every minute raising my son. My home, the building I live in, was a tiny part of raising my son. In fact I will miss a tree the most. A purple plum tree. We planted it our first spring in the house. My son was in his digging phase. He dug a giant hole for a very small tree from the Home Depot that comfortably fit in our car.  We bought peat moss and read about how to plant and care for a tree. We trimmed that tree every spring. My son grew like a weed and so did the tree. My son is a tall and slender man. The purple plum tree is full and large. Like my son a mature specimen. This spring some 17 years later he needed a ladder to prune some dead branches. The tree is taller than our house. This is a memory that will last a life time.

My move is the reason why there have been few posts in July. I have spent much time discarding the cultural residue, the material items, of our life. This has been liberating. My move will be very simple. Many book boxes. Kitchen stuff--lots of kitchen stuff. No furniture. No chairs, desks, dressers, framed pictures. A clean slate if you will. But even this minimal move has consumed much of my time. So be patient with me. I will get up to speed in the weeks to come. I have much to write about. I am deeply disturbed by what I have been reading about with regard to assisted suicide in the Unite States and especially in the UK. Compassion and Choices has disseminated a video in "celebration of the ADA". To say I am stunned is a major understatement. Talk about nerve! I am excited about the upcoming semester. I will be teaching in the honors program again as well as graduate students. I intend to seriously challenge the graduate students. I will also travel and give many presentations. Ah, the life of an academic. You gotta love it.

Below is evidence of my move. My living room is the staging area. 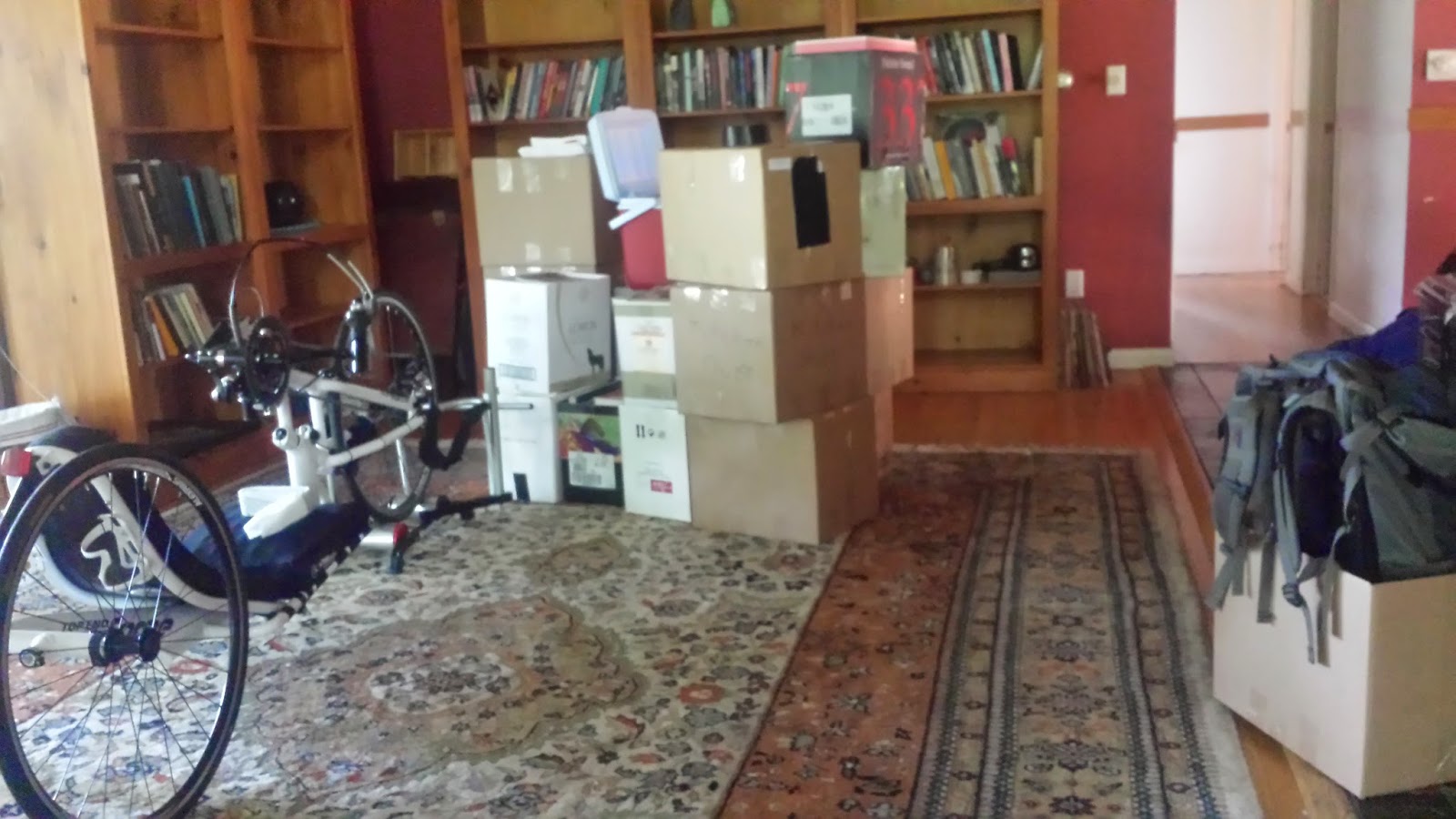